Proton not so bad

I read with interest this post by Dave Avran,

After Maxisgate, Peugeot Malaysia gets flamed on social media.

It basically tells a story about someone who complained about Peugeot.

Well, it's not Proton for a change.

Actually, I have friends who drive Peugeot.

They have their complaints too, but not as severe as the one told in Dave's post.

Peugeot has some nice looking cars, but I don't care much to own any of them.

French cars can be a bit troublesome.

Except for the Germans, the Europeans are not really good at making cars for ordinary people.

Japanese are much better at that.

I wish Proton had stick with Mitsubishi as its partner back then, instead of trying to be more European.

My father has a Preve and sometimes I borrowed it. 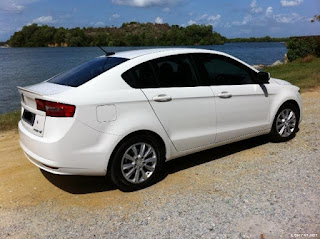 Hate that the signal indicator lever is on the left like European cars.

Because of that, I can't drive with one hand as I need both to steer and signal.

Anyway, the Preve is not such a bad car.

I love driving it especially along twisty roads in sports mode gear.

If only Proton could iron out all those small but irritating little problems, it would had been a great car.

For instance, my father's Preve always have one of its main light bulbs burnt out.

The car is just three years old, but I think my father had changed up to seven light bulbs so far.

At the moment, he's driving without the right main light.

He said he is waiting for the other one to go off as well before he fix them.

Save him time to go to the workshop.

I think it has something to do with the wiring.

The people at Proton service centre didn't seem to know what's wrong with it.

My father had given up on them and accepted it as it is.

But still, he's not angry with Proton.

At least, not anymore.

He said it's just his bad luck to get a slightly faulty unit.

"It could be the same, if I had bought other than Proton," he said.

For him it's like dealing with a troublesome woman that he love.

Well, my father is a very patient man.

If it's me, I would probably cause quite a ruckus.

But then again, bitching about Proton is a normal thing.

Everyone seem to enjoy doing that.

Maybe now that Tun Dr Mahathir Mohamad is no longer associated with it, things will improve at Proton.

As it is, everyone blames the old man for everything wrong with Proton.

He really shouldn't make all those noises and just rests at his old age.

Whatever it is, I hope Proton will really improve from now on.

Notwithstanding all the complaints, it's still nice to have our own national car.

Besides, it create thousands of employment and saves the country a lot of money...among other things.

Honestly, I would prefer a Proton except for a Honda :)
Posted by Annie at 08:30