The other day I mentioned about my father's Preve needing a change of light bulb every now and then in this post,
I also mentioned that my father was driving around with only one main light functioning.

This is among the advises I received


tebing tinggi12 April 2016 at 17:00
Annie ,
Old man is like that , just drive the car to the nearest workshop and change the bulb's for him.
He will adore you for the concern .

It made me thought "Hey, true also. I should have done it for the old man".

It so happened that my father came to visit me today, and as expected he hadn't fixed the light yet.

So I took the car to a nearby car accessories shop.

The Chinese guy who runs the place happens to drive a Preve too.

He said his car used to experience the same problem.

He said the car needs better quality light bulb because its light casing tends to retain too much heat.

He recommended a Bosh brand which costs RM50. The usual bulbs cost between RM30 and RM40.

The guy took less than five minutes to instal the new light bulb. 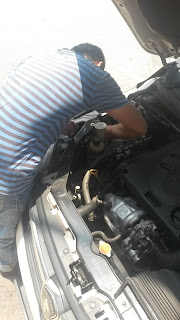 Actually it's not much effort to make the car safer.

I think I need to ask my mother to scold my father too so that he'll take better care of his car, among other things.

My mother is more garang than me.

Okay, I just want to write about that for today.

Lesson of the day: Doing really beneficial things such as making my father's car safer is better than bitching about politics.

Really. That's how I feel at this moment.

Berhati-hati di jalanraya ya.
Posted by Annie at 23:14