It's been quite a few days since Tun Dr Mahathir Mohamad last fired a verbal salvo at PM DS Najib Razak.

I think it's either because he had run out of ammunition or saving them to pace his rate of fire.

The latest were allegations by senior journalist-blogger Datuk A Kadir Jassin as in his post,

Another anti-Najib blogger, Syed Akbar Ali then highlighted Kadir's complaints in his post, particularly on this point,

Yes, I was particularly interested in that part of Kadir's allegation too.

I hope the Umno guys will come out strongly to deny this particular allegation.

Coming from someone like Kadir who is a Tokoh Kewartawanan Negara, the allegation can be quite damaging not only to PM DS Najib Razak, but Umno as a whole.

I would have not wished Umno to react the same way if such an allegation comes from Pakatan though.

But since it came from Kadir, I think they should deny it to prevent further damage to Najib and the party.

The allegation insinuates the worst type of money politics which could be practiced within Umno.

Even if it's true that such amount of money will be dished out to the Umno divisional chiefs, then it must be made publicly known that the money belongs to the party and not the government.

It must also be made known that the total RM30 million allocation for the whole thing was meant strictly for party works instead of enriching the respective ketua bahagian and their followers in return for their support ahead of the crucial party general assembly, scheduled by end of this year.

At the Umno general assembly, it will likely be decided whether the party election will be held next year as scheduled or differed until after the next general election about three years from now.

This explanation must also be done convincingly by someone credible.....eerrr, I can think of only one name - DS Mustapa Mohamed. 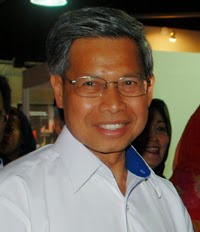 Sorry, definitely not the likes of Ahmad Maslan, Sabree Chik or Ku Nan and the other jokers at the Umno HQ, please.

Okay, all that should be done if Umno don't want things to get too tough in the next general election....unless of course, the Umno's brilliant strategists and media bosses think otherwise la.