I spent about an hour watching the recordings of the speech by former PM Tun Dr Mahathir Mohamad in Ipoh yesterday.

You can find the recordings here:


The almost 90-year-old statesman looked and talked as if he was still in his late 60s.

He seems very energetic and enthusiastic about his main current endeavor, which is to prevent Barisan Nasional from being defeated in the next general election.

And of course he intends to do that by urging Umno to replace DS Najib Razak as their party president and prime minister.

There was however nothing really new in his speech yesterday.

It was a repeat of the same questions and allegations directed at Najib.

Still, it was fun as always to watch and listen to the handsome old man as he addressed the enthusiastic crowd in his trademark cool and witty style. 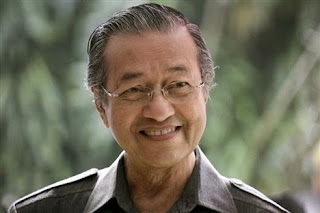 What I however don't really like about the event, as it had been with past public engagements by Dr Mahathir was the prominent presence of characters whom I deemed as weird and shady.

For instance, during the questions and answers session, when the name of Umno turncoat Tamrin Ghafar was announced as the next person to pose a question to Dr Mahathir, I actually cringed.

These sorts of people seem always to be there whenever Dr Mahathir was around.

I'm quite sure these sorts of Umno rejects will hang around Najib instead if the PM allows them to do so as there's more for them to personally gain something by doing so.

For me, their presence somewhat cheapened the event which was supposed to be a vehicle to further Dr Mahathir's noble intentions.

They were the equivalent of those clowns from the Najib's side who were featured on TV3's prime news simply for the purpose of bashing Dr Mahathir.

Anyway, Najib yesterday appeared to give Dr Mahathir an answer about the allegedly missing money of 1MDB. Here is the report by Rakyat Post,

If I was wealthy I'd buy this goldmine, PM says of 1MDB projects

Personally, I am not sure whether that's really an answer that Dr Mahathir wanted.

Najib had also insisted that


Well, he actually first said that in Sabah the other day and I think he will repeat it again and again later for quite awhile.

In relation to what Najib said that he was fighting his detractors the same way Dr Mahathir did during his premiership, I think it should be noted that during Dr Mahathir's time, BN had the two third majority in Parliament while now it no longer has the same amount of support.

Thus, during Dr Mahathir's time, the risk of BN losing the general election was not as great as now, with all these troubles going on.

I don't know how long this ding dong fight will go on, but the longer it drags on, the worse it will be for Umno and BN.

As I had previously wrote, I hope Najib, as the one in power and younger of the two will try to see Dr Mahathir again to end the fighting.

I think it's the only way for Umno and BN to survive beyond the next general election.
Posted by Annie at 08:59