I doubt that many Malaysians knew about Wang Kelian until a few days ago.

Well, I have been to the place, which is located at the Thai-border in Perlis.

I was at the minor border crossing many years ago to check on its weekend bazaar. 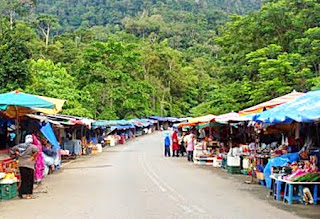 On weekends, Malaysians were allowed to cross into the Thai side of the border there without their passport or border pass for several hundred meters to the bazaar which the locals called "Nat".

It's a nice place to be.

The greeneries of the Nakawan range which made up the back drop of the place was picturesque.

I enjoyed my afternoon at that place.

However, I also got to know that the place was a smugglers' heaven.

I'm not so sure about now, but back then I observed that the smuggling activities there were rampant.

The small time smugglers whom I saw were actually Thai villagers who carried mainly packets of high grade Siamese rice through the border check point to be sold in Malaysia.

I noticed the same thing happening at the main border check-point of nearby Padang Besar.

The smugglers went about their business right under the nose of the border guards of both sides, who seemed to tolerate the whole thing.

I did ask a friendly member of the Unit Pencegahan Penyeludupan (UPP) stationed there as to why he and his colleagues didn't take any action against the smugglers.

Nonetheless, I was told by my friends among the locals that the border guards were given some "incentives" by the smugglers to turn a blind eye.

I was also made to understand that the goods being smuggled were also not all entirely as harmless as just the beras Siam. There were cases of firearms and drugs being smuggled across the border too.

A few years ago, there was even a tremendous uproar over the smuggling of Malaysian subsidized diesel through those border checkpoints.

As we now know it, these breaches of our border had actually turned into something even more sinister.

Who would have ever thought that there were mass graves to be found in this country.

But that's the hottest news about Malaysia now,

Here is the news by UK's The Guardian,
Mass graves of suspected trafficking victims found in Malaysia

In light of these developments of the migrant/refugee issue, I think it was a good thing that our government had decided to provide humanitarian assistance and temporary refuge for the boat people, especially the Rohingya refugees who were forced to flee Myanmar after being prosecuted in that country.

Kudos to Foreign Minister DS Anifah Aman whom I was made to understand as being the man who single handedly pushed the government to make that decision.

As I had previously wrote, not all of those in the administration of PM DS Najib Razak are bad.

Not only it was the right thing to do, the move may had actually saved the country from being labeled as being inhumane when faced with such a human tragedy.

Just imagine the kind of bad Press that our country would have to suffer if the mass graves in Wang Kelian were found while we were still hesitating to decide whether to assist the Rohingya refugees who may be dying on those boats.

As the authorities continue to comb the forested area in Wang Kelian for possibly more graves of victims of the human trafficking syndicates, it is hopeful that they could also devise a strategy to prevent such a human tragedy from happening again.

The authorities also need to tighten security at the border.

Maybe they should spend more on high-tech surveillance equipments such as unmanned aerial vehicles (UAV) while at the same time enforcing stricter discipline among security personnel guarding the country's border.

Cooperation on security with neighboring countries should also be enhanced.

Last but not least, I am also of the opinion that countries such as Myanmar should be chastised by the international community for being irresponsible in letting its domestic problems, such as the ethnic prosecution of the Rohingya to cause incidences of human tragedy such as now being discovered in Wang Kelian.

I do wonder what happened to that Nobel laureate democracy heroine Aung San Su Kyi as her country washed its hands over the Rohingya refugees issue.

Here is a report on her by Al Jazeera,
Aung San Suu Kyi's inexcusable silence

After reading that article, I can't help but to have a fleeting thought that maybe Anifah Aman is a better humanitarian than her.