Hoping for The Benchmark to get it wrong (updated 2)

Deputy Group Managing Director and Chief Executive Officer Datuk Johan Abdullah said the investment is a commercial decision which fits with TH’s risk appetite and has gone through all internal due processes accordingly.

However, TH denies that the Group is buying the Signature Tower (Phase 2) as reported in the blog. Leakages of proposal papers are not proof of approved investment decisions.

The purchase price of the property at RM188.5 million was at a discount to the current market value as appraised by an independent professional valuer.

I was not immediately aware of it as I'm not on Twitter.

A friend forwarded me this, 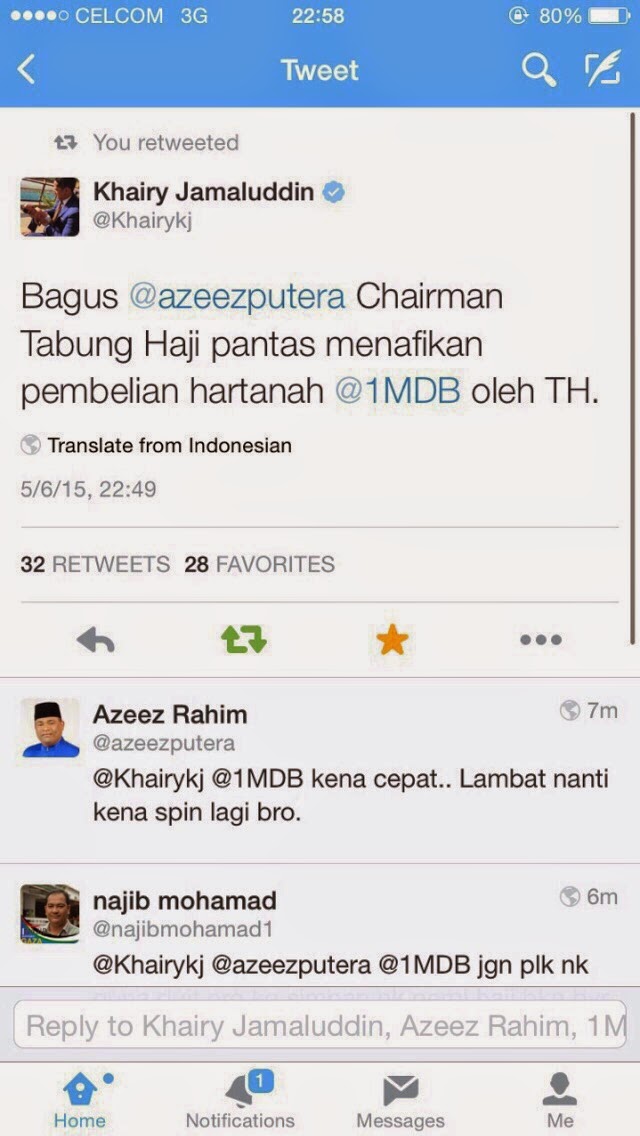 I first read the occasional postings of the pro-establishment The Benchmark blog during the run up to the 2013 general election.

Back then, I found the blog to be fresh and brave.

It's however been a while since I last read anything posted in the blog.

Nonetheless, today I noticed its latest post, which I thought was quite disturbing.

The blog claimed that,

"Tabung Haji has entered into a deal to purchase 2 plots of TRX land from 1MDB for a total sum of RM772 million cash. Tabung Haji is using depositors money and not government funds.

"According to a set of documents made available to us, Tabung Haji is believed to have paid a whopping RM2,860 per square feet (RM194million) for the first plot of land. Little birds in Tabung Haji confirmed it was a fast-track deal which gained the Minister's approval in less than two weeks and that the money has been paid to 1MDB in full, as demanded.

"For the second plot of land in the same TRX vicinity Tabung Haji has agreed to payRM3,900 per square feet (RM578million) in cash. Don't bother about the 'Signature Tower', its just a...

"In both deals the risk analysis by experts in Tabung Haji is self evident (see documents).

"Despite the high risk and a looming property and office space glut in Kuala Lumpur, Tabung Haji seems to be twisted into pumping cash into 1MDB for land which was initially owned by the Government.

"1MDB, as exposed recently by former Prime Minister Dr Mahathir Mohamad, is believed to have been awarded the large track of Government owned TRX land in Jalan Tun Razak at a dirt cheap rate of RM60 per square feet.

"1MDB is also believed to have paid a slightly higher rate of about RM90 per square feetfor the Sungai Besi RMAF airport/ base land.

"Why is Tabung Haji now paying an average of between 48 to 65 times more for the same piece of Government land with the poor depositors money?

"Basically 1MDB got Plot 1 for RM4 millionfrom the Government and now Tabung Haji is paying RM194million.


To read the The Benchmark's post and view the documents which allegedly support the blog's claim, please go to this link,

A new deal for Malaysia - TABUNG HAJI and 1MDB

I'm sure the media people were already scrambling to get confirmation or denial to this claim by The Benchmark from both 1MDB and Tabung Haji.

I expect the full story to be out by tomorrow.

These sorts of claims could be very damaging to the government if not clarified immediately.

Personally, I hope the claims were false.

It's because just two months ago,

Tabung Haji expects 2015 to be a challenging year

I'm sure the Tabung Haji depositors, who mostly entrusted the safekeeping of their life savings to perform their pilgrimage to Mecca will not be happy with these sorts of stories.

Yeah, hopefully The Benchmark got it wrong and those documents it alleged to be evidence of the Tabung Haji's 1MDB deal were false.