Jihad cosplay and other Sunday thoughts

It's another Sunday. A rest day.

The weather where I am now is beautiful.

The sky is blue with clumps of huge cloud floating about.

I am sitting with this laptop on a bench at the edge of a neat little garden.

The birds which set up their nest at the ledges underneath the house ceiling were chirping away. Probably their eggs had hatched last night.

I am feeling restful.

Except for the slight pain in my chest, the rest of me is all right.

Okay, my knees can't bend properly and I am overweight, but still I am feeling good today.

There's so much to be grateful in this life.

As for excitement, I think I have enough of those.

I always wonder why so many people find it so hard to appreciate what they have and always asking for more.

I believe all those complaining people have what I have, those fine pleasure to pause and see the beauty of the world around us.

We ate the same food, more or less living the same standard of life, have the same amount of excitement....yet they want more and more.

Well, I guess everything is never enough for some people.

And when they don't get what they want, they have to blame it on someone else.

Never mind that their capabilities were limited, and the fact that what they want were not meant to be theirs.

Some have love, but want it to come from others who are more "capable".

Forsake the love they already have to chase after what they believe they deserved and end up with nothing.

In the end...blame others for their stupidity and miserable life of their own making.

These people would forever be seeking an outlet from their pitiful existence.

The Chinese among them will work themselves to the bones and with whatever money they have spend it on pleasurable activities such as gambling in Genting or  having an overseas holiday.

The Malays among them, however, always find the "work themselves to the bones" part not so appealing. So they went for a more relaxed way of seeking an outlet from their miserable life.

They dream of paradise.

Yes, it's true, the guys among them dream of virgin houris in paradise among other things. I am not sure what the women going to get out of it, but they were equally devoted in wanting to go to paradise.

Well, can't blame them. Heck, I also want to go to paradise. It's nice, okay. Rivers of milk, honey and wine among other things.

The problem however with these people was that they want everything easy including when it comes to finding their way to paradise in the afterlife.

Those were all good deeds which Allah promises paradise in return , but they are not very interested. Those were too much hard work for them.

They want the easiest short cut way to paradise.

Yup, they believe that by joining Pas they can go to paradise in the afterlife.

The men among them believe that by supporting things such as the Pas' version of hudud, they can get virgin houris in paradise.

To add excitement to it they occasionally have Jihad cosplay sessions on the streets of KL: pretend to be Islamic fighters battling the evil Jews in the Middle East, while calling for the end of evil Barisan Nasional rule which policies had enabled their Malay community to raise above the poverty line all that many years ago. 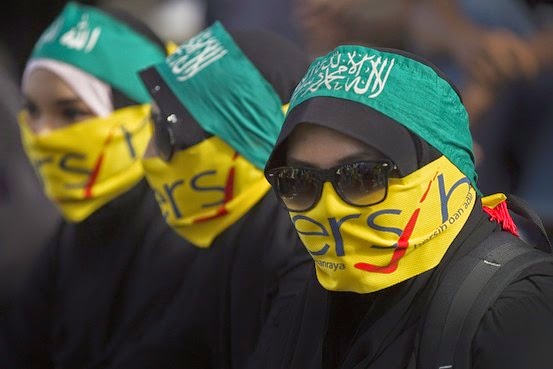 Quite exciting, I guess. Never mind the hot and humid weather and that middle eastern clothing's.

Look, I think the occasional Chinese girls at these protests have better fun okay. And they don't sweat too much due to their more infidel outfit. 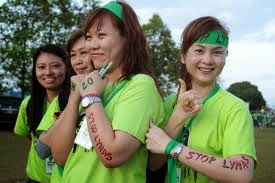 And I bet the guys, including those from Pas were tempted...a bit at least.

But, nonetheless, these days it's not so much fun anymore.

The police are not even bothered to do anything to stop them.

It's just gather around, shouting slogans, takbir here and there and that's about it.

Really, people are tired of it all.

I suggest they really go to the Middle East and fight the Jews there for an exciting exit to paradise.

Anyway, it's so lame la fighting jihad so that the likes of Anwar Ibrahim, Lim Guan Eng and Mat Sabu can rule Malaysia from Putrajaya.
Posted by Annie at 10:00