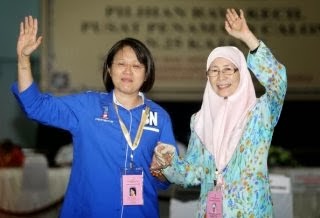 I guess the show must go on for Anwar and gang.

It doesn't matter to them what is happening in this country. For them, the people must relentlessly be pushed to satisfy their agenda no matter what.

Once again, Dr Wan Azizah will have to play the role of pitiful spouse of a victimized Anwar. It's supposed to win him the people's sympathy.

But does it really matter to us all?

Do we really want to get angry and go to the streets picking up a fight with the authorities over Anwar's conviction for sodomy?

Do we really believe it when Anwar accused PM DS Najib Razak of engineering his conviction? The same way he engineered the Kajang by-election?

I was told that just about 1,000 Pakatan supporters turned out to accompany their leaders at the nomination center in Kompleks Sukan Bandar Baru Bangi today.

I was also told that only a handful of Pas people turned up despite the presence of their party president DS Abdul Hadi Awang. Almost all of the flags carried by the Pakatan supporters were those of PKR and DAP. There were less than 10 Pas flags seen there.

On the BN side, about the same number of supporters turned up to support Chew.

It's probably among the lowest turn out of supporters on nomination day of any by-election in recent memory.

I think this Kajang by-election will be remembered as the most senseless of all.

It serves no purpose other than those of Anwar's.

It was supposed to put him in the limelight as he was fading away into obscurity.

It was also supposed to win him public's sympathy because of his sodomy case.

The campaign in Kajang was designed to whip up the anger of the people against the government.

But I believe that most people have become wiser of late and not buying all those cheap tricks anymore.

There are bigger things in life than politics.

The BN government may not be perfect but it has managed this country for half a century with the end result being not bad at all.

We live in relative peace and prosperity despite our different ethnic backgrounds.

We were able to keep our respective identities and be proud of our ancestral heritage without offending each others too much.

We are friends and in certain instance lovers of each other despite our differences.

In this country, we also learned that we can be united as a people without having to abandon our unique differences.

For instance, every sensible Malaysians with a heart are united in our prayers and hope for the missing MH370.

It's a tragedy, which I believe opened our eyes and made us see that all the bullshit peddled by selfish politicians are actually irrelevant to our life.

It should made us wonder, do we need this by-election at a time like this?

We also do not need those selfish politicians to dictate on us how we could be united.

Slogans and false sentiments will not unite us.

Only a clean and sincere heart will do it for us.
Posted by Annie at 19:54