As the nation and the rest of the world started grieving for the loss of MH370, there were those who went to cyberspace trying to pin the blame on Malaysia.

They have to blame someone for everything.

Some section of the Chinese media had immediately accused the Malaysian government of being too hasty in declaring the plane and everyone on board as being lost. They hinted at a cover up.

This is the front page of a Hong Kong newspaper the morning after the announcement by PM DS Najib Razak that we had lost MH370, 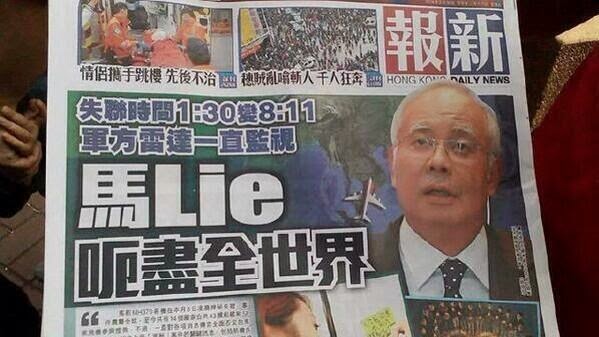 Reports such as these were picked up and went viral in the social media, especially the Chinese section.

Sadly, many Malaysians joined the chorus condemning their own government and country.

Some even expressed shame for their own country and apologize to the Chinese who condemned Malaysia.

It has always been argued by the extreme right Malay groups that Malaysian Chinese have no loyalty for this country and that they are the "bangsa pendatang".

I disagree with them and had consistently maintained that this country belong to the Chinese as much as it does for the Malays, even when the Chinese badly let me down such as on May 5, last year where they collectively rejected overtures by the moderate Malays during the 13th General Election.

But the behavior of some Malaysian Chinese in the social media yesterday totally disappoint me. They lend credence to the accusations by the Malay right groups that the Chinese community will abandon this country when it is under attack, or even may join the attackers for their own selfish interest.

I believe that the political conditioning in this country over the past 10 years or so had contributed to such sentiment among many in the Malaysian Chinese community. I wouldn't fully blame them as they had been fed with the notion of hate based on claims that they had been victimized by the BN government.

How can I blame them for having no loyalty for this country when people they worshipped as leaders of their community kept on telling them that they were being treated as second class citizens and being discriminated in every way. All that, despite them being the most successful ethnic group in this country under that very same system which they were told of being unfair to them.

Nonetheless, I am sure not all our Chinese brothers and sisters are the same. I highlighted this one in a past posting,

It is my sincere hope that all Malaysians could stand united for the sake of our country during this trying time.

This country belongs to all of us, so, please defend it together.

In all honesty, no one wanted the MH370 tragedy to happen.

The Malaysian government certainly does not want it to happen, and has been trying its best to facilitate the search and rescue operation despite the mind boggling nature of what happened to the plane.

This was even acknowledged by experts such as you can read here,

Yesterday, I also send a message to a close aide of the Prime Minister on the need to refute the Chinese media's assertion that Najib and the Malaysian government have been too quick or even lied in declaring the loss of MH370.

I hope in the few days to come, there will be a concerted effort to make it very clear, especially to the Chinese, that our Prime Minister had made the announcement after "we did everything after international team conducted their investigation and corroborated all data findings".

It was certainly not something done by Najib for the fun of it.
Posted by Annie at 11:16