On the day MH370 went missing more than a week ago, I had highlighted what  transpired at the Pakatan's convention in Shah Alam that very same day.

Prayers for MH370 and what happened at the Pakatan's convention

I was immediately lambasted by Pakatan supporters who came to this blog and accused me of trying to exploit the incident for BN's political mileage even though the apathy displayed by leaders of Pakatan that day was indeed appalling.

When the enormity of the missing plane finally settled into their consciousness, these Pakatan leaders started to lambast the government with all kind of accusations ranging from incompetence to outright malice.

There should be no question that they were going all out to exploit the situation to gain political mileage.

Yet for the overwhelming majority of their supporters, there was nothing wrong for them to do so.

These Pakatan supporters on their part went to the social media and ridiculed the search and rescue effort conducted by their own government. Some, without any sense of shame, declared that they were ashamed to be Malaysians.

The hate must continue to be kept burning for these people, I guess.

Still, the exploitation of the missing MH370 continues.

Here is what transpired in parliament yesterday,


'Pakatan MPs will stand in for those on MH370'

Apparently, that comical Pas guy Mahfuz Omar was at it again. 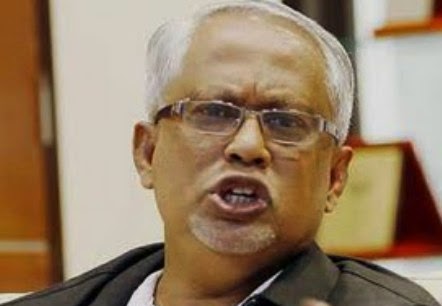 Now that the plane is missing instead of laden with explosives, complete with hijackers armed to their teeth parked in front of his house, Mahfuz bravely said he was willing to exchange his life for those on board the plane.

How heroic, isn't he?

On top of that, he also said other Pakatan leaders were also willing to do the same.

I'm sure families and loved ones of those on board the missing plane would be moved to tears by Mahfuz's heroic statement.

They will surely vote for Pakatan in the next election....yes, even the Chinese and other nationals among those affected by the missing MH370 would fervently wish that they can vote for such brave and selfless members of parliament.

I know for a fact that the majority of Pakatan supporters were actually very proud that their splendid leaders had come out with such brilliantly brave offer.

They actually believe that Malaysians as a whole too would be moved by Mahfuz's statement.

BN should by now just give up the fight for the Kajang and Balingan by-elections.

There is no way that they can compete with the bravery of these Pakatan leaders.

Am I right, Mahfuz?

I guess Chew Mei Fun will indeed lose her deposit as predicted by DAP supremo Lim Kit Siang because of that Mahfuz's gem of a statement.

I wish Kit Siang's son Guan Eng will outdo Mahfuz after this.

Well, I shudder to think what would happened if these bunch of full of themselves Pakatan clowns do manage to take over this country.
Posted by Annie at 10:30