Was waiting for Grab to get back to office from Bangsar when I received news of Najib's arrest today.

The Grab driver, a middle aged Chinese man was celebrating.

"Now we can throw Najib in jail and get back the billions that he stole. After that we'll get the others," he gleefully exclaimed.

Then he went on and on with the usual RM1 trillion debt, country about to go bankrupt etc.

No point saying anything.

People like him have always wanted to see Najib going to jail.

It was after all a PH election promise.

One way or another they have to do this.

I just want to see how they are going to go about putting Najib in jail.

Next, it should be Rosmah, then Zahid, then the rest of those other people, as what the Grab driver said.

Well, that's how it's going to be over the coming days, weeks and months, I guess.

All these reminded me of the time when they first put Anwar in jail.

I was very young at that time but I remember the events well.

I remember that no mercy was shown.

They even brought to court the mattress on which Anwar allegedly had sex with Azmin's wife. 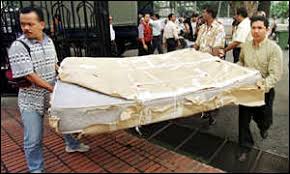 It was ugly, to say the least.

I wonder if Najib's case will be that bad.

After all, Najib's case is more about money.

But still, anything could happen.

Well, at least the case is going to a real court instead of just public cyber lynching and trial by media as it is now.

However, if I have to bet on the outcome, I would not hesitate to choose where to place my money.

I just can't imagine Najib being found not guilty.

I think all the PH people would agree with me.

They have made up their mind about this.

Innocent until proven guilty....I don't think so.
Posted by Annie at 21:37