I thought this sort of things would not happen in this new and more liberal Malaysia,

The LGBT community must be very disappointed. After all, they had gone all out in support of PH.

Understandably, some of them had a little demo in front of the Youth and Sports Ministry building this morning over the matter.

They are definitely wishing they could fry Syed Saddiq's ass, among other things.


Numan’s supporters were also enraged with Syed Saddiq’s denial, insisting that he was discriminating against a member of the LGBT (lesbians, gays, bisexuals and transexual) community for not doing enough to defend Numan.
“Syed Saddiq may be straight but less of a man than a gay man for sure! Coward,” Betty Teh wrote on Twitter.
“I’m absolutely disappointed and disgusted with you Syed Saddiq. Your ministry’s website showed the list of your special officers which included an openly gay man, not that his sexual orientation has anything to do with his ability to do a good job,” Twitted Afiq Harraz.
I think Syed Saddiq should have at least defended his aide and not abandoned him like that.

After all, the guy  had worked hard for him in toppling BN/Umno. 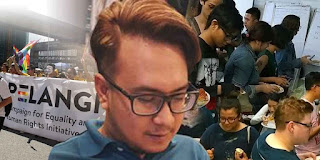 Guess, it's the same old story in PH too - once you are deemed a liability, you are out.

Well, gay guys and gals, that's just too bad for you all.

No more LGBT votes for Syed Saddiq and gang in the next general election, I guess.

Here's a song to cheer you all up,