Anifah and KJ are right

I have to say that I agreed when

not warranted for protest


Quite brave of them, I think.

Seriously, did the opposition MPs needed to do that? 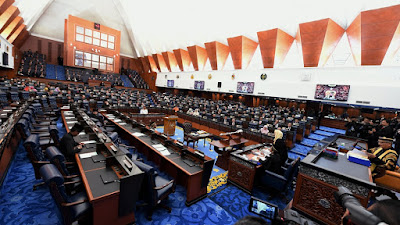 It's kinda silly and maybe even childish.

I think they need to do better than that.

PH people staged many walkouts too when they were the opposition.

Of course they were being silly back then.

But that shouldn't be an excuse for staging the walkout yesterday.

In my humble opinion, BN people need to be better as the opposition than the PH people.

They shouldn't walk out over something which I think was a small issue the way their predecessors used to do.

It's indeed silly because later on, they were sworn in as MPs in front of the new speaker guy whose appointment they had just protested against..

I think the opposition MPs should reserve their more dramatic actions for more serious occasions.

If they pull such stunts for everything they wanted to protest in parliament, then I think the people would not like it too much.

They are there to represent the people and if they stage a walkout too often, then that's tantamount to not doing their duty of providing checks and balances to the PH government.

They need to be smarter next time.


I don't think Najib should be the one who said that.

Even if the intention was good, it should be voiced out by Zahid as opposition leader and not Najib.

Najib is after all just an opposition MP now, the same as Anifah and KJ.

I think he should just concentrate on his ongoing legal battle, or at the very least, restricts his attack against PH.

That way I think the people will be more sympathetic towards him.

Well, whatever it is, to be more positive I think yesterday's incident in parliament showed that democracy is still alive in this country, even among the opposition parties.

Yes, that includes Umno too.

No blind loyalty or herd mentality there.

Hopefully they will learn from the whole thing.
Posted by Annie at 01:33