I just have breakfast.

Sat under the Japanese bamboo trees in front of the house for awhile.

It's very quiet and peaceful here.

Then I received this WhatsApp message with this poster, 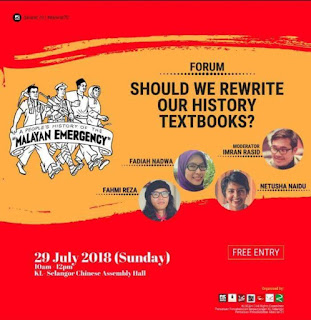 What nonsense are they up to over there, I wondered.

Preaching about the good communists.

Well, there's this one,

With BN out of power,

Au, who speaks fluent Malay, stopped school after primary 2.
He spent nearly a decade fighting with the CPM’s 10th Regiment, which had many Malay fighters, during which time he said he had learned everything from politics to economy.
Au said he was among those who welcomed PH’s victory in the May 9 polls.
“The Umno-led Barisan Nasional’s policies weren’t good for the people,” he added.

This is New Malaysia, okay.

Malaysians voted for all these and we should respect their wishes.

As for the communists, the closest I got to them was when I was invited as an observer to the 18th national congress of the Communist Party of China in 2012.

But of course, Jinping's father was not the supremo of Communist Party of China.

I have to say that I don't mind the communists so much at that time, except the guy who was assigned to be my minder who was so kepoh and wanted to know even what I think about his party.

The guy was tall and handsome and an officer in the People's Liberation Army. Can't be too cross with him though as he was just doing his job.

Well, except for the tight monitoring, I did enjoy the whole thing.

I think I'm just among the few Malaysians who had the privilege of attending such an event at the Great Hall of the People.

If you ask me, I don't think China is much of a communist country anymore.

So many rich people there now.

If there are rich people, then there must be poor people too.

So much for the equality concept of communism.

I even saw a pink Ferrari at the Beijing's Bar Street.

Maybe we could have seen a pink Ferrari in Bangsar if the communists had won the insurgency back then during the Emergency.

Maybe that's why they want to rewrite history now.

Okay, here's a video you should watch before we start rewriting the history of this country,