Jais Sarday and Johor Umno are not so bad

Woke up a bit too early.

Had slept about 10pm last night after a very exhausting day.

That gives me a bit of time for this blog.

Been busy of late and therefore have not much time to write here.

My boss thinks that I had been goofing around too much and told me to do some serious work.

Need to earn a living, okay.

Well, this is the latest story that interest me a bit,

JOHOR BAHARU, April 2 (Bernama) -- Johor UMNO is focusing on strengthening eight parliamentary seats in the state in the effort to ensure triumph at the coming general election (GE).

"Our priority is to defend all the parliamentary seats and garner more votes especifically from Malay voters," he said.

He said the eight out of 26 parliamentary seats would also be observed by the UMNO headquarters with the UMNO divisions concerned needing to conduct activities to meet the target set.

Each of the parliamentary areas had numerous issues and problems which must be addressed to ensure victory, he added.

Not that I care too much, but since I'm in Johor, I think I need to take note of these sorts of stories.

Well, I know Jais Sarday from back then. 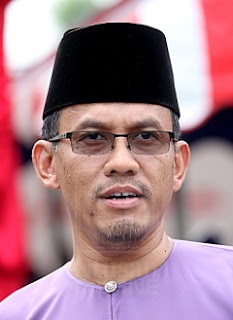 He's the main Umno guy from my hometown Kluang.

I can't say that I like him very much, but I have to admit that he's quite an okay guy.

He may not be as good as his predecessor Datuk Ahmad Zahri Jamil but he seems quite level headed and an old friend even once pointed to me that Jais can be quite brave.

Anyway, Jais didn't name the eight parliamentary areas which will be focused upon by Johor BN for it to win the next general election as per the Bernama story.

Bernama also didn't bother to furnish us with that details.

I guess the reporter was in a hurry to file the story while the editors can't be bothered too much with these sorts of stories to ask for proper background research.

Never mind, I think I have some idea as to which areas Jais was talking about.

You can read it here at this previous post of mine;

Those 25 are parliamentary seats won by BN with less than 2,000 majority in 2013.Six of them are in Johor.They are Ledang (Umno - 1,967), Tebrau (MCA - 1,767), Muar (Umno - 1,646), Segamat (MIC - 1,217), Pasir Gudang (Umno - 935), and Labis (MCA - 353).Those from my earlier list not in this line up are the five Johor parliamentary constituencies already won by the opposition along with Tanjong Piai, Johor Baru and Pulai.Wee Jack Seng won in Tanjong Piai with a majority of 5,457 in 2013. He won by a majority of 12,371 in 2008.Shahrir Samad won in Johor Baru with a majority of 10,415 in 2013. He won by a majority of 25,349 in 2008.Nurjazlan Mohamed won in Pulai with a majority of  3,226 in 2013. He won by a majority of 20,449 in 2008.Well, you may think that Shahrir's seat in JB is safe because of his over 10,000 majority but bear in mind that the man will be over 70 years old in the next general election and he has no successor in sight. If he can lose about 15,000 majority in the last general election, it may not be impossible that he can lose another 10,000 in the next one. After all, the Malays who enabled him to win in JB are the so-called urban Malays. They are the ones that some Umno people think the party can afford to ignore as they believe their support comes from mostly rural Malays.As for Wee and Nurjazlan, you all can see that they have lost a huge chunk of their majority. Knowing the ground at their constituencies, I tend to say there is no guarantee that they are not going to lose whatever left they have in the next general election.

Really. Quite silly that one :)

Well, whatever it is, from what Jais said, I guess Johor Umno will be focused at defending areas not lost in the last general election instead of trying to win back the lost five - Gelang Patah, Kulai, Kluang, Bakri and Batu Pahat.

And when he said the effort will be concentrated at retaining the Malays support, that reenforced my belief that it will be a defensive war for BN in this front line state from now on.

They probably have lost hope at winning back the Chinese.

I think this is unfortunate as for me, they must continue with trying to win back everyone.

Do take note that about 40 per cent of Johoreans are Chinese.

As long as there is still a single Chinese who is willing to vote for BN, they must continue being what they are - a coalition which represents all Malaysians.

After all, that's the reason why Malaysians continuously voted them to power since the country's independence.

Some other bloggers want Umno to kick out MCA, Gerakan and other "useless" non-Bumiputra parties and replace them with Pas.

Guess, some people don't mind the country being totally polarised by race and religion for the sake of politics.

Anyway, I'm glad that Jais didn't go around telling Bernama that Umno is going to strengthen the "risky areas" by kicking out everyone who disagree with the party leaders.

He didn't go around saying "either you are with us or against us" or anything stupid like that.

Jais is not a spring chicken after all.

He knows Johor Umno and BN need everyone who still love the party onboard for the next general election.

I hope his boss MB DS Mohamed Khaled Nordin and the other are the same as him.

I also hope that they don't later on get stupid and agree with the most stupid suggestion of all - get rid of those loyal party members who disagree with the leadership and replace them with Pas people.

A very clever blogger who has never really been on the ground in Johor suggested that.

This is what I posted on it,

Johor Pas contested 31 out of the 56 state seats in the last general election and they won only four.On the other hand, Johor Umno contested 34 out of the 56 state seats and won 32.The state seats which Pas won are Sungai Abong, Maharani, Parit Yani and Puteri Wangsa.Sungai Abong and Maharani are located somewhere in Muar and have been with Pas since 2008.The Pas guys who won there defeated Umno guys.It seems that these are the only places in Johor where Pas guys can beat Umno guys in a Malay majority area.Sungai Abong had 51 per cent Malay voters while Maharani had 55 per cent.Muar Malays can be a bit funny.As for Parit Yanni, the Pas guy there defeated a MCA guy in a Malay majority area (54 per cent). I think the outcome would have been different if an Umno guy contested there for BN.In Puteri Wangsa, it was a classic Chinese tsunami case. The Pas guy received an almost solid support from the Chinese who made up 47 per cent of the voters to defeat a MIC guy.  Malays made up 40 per cent of the voters there.For parliament, the Islamist party contested eight out of the the 25 seats in the state and it lost all of them.Johor Umno contested 17 out of the 25 parliament seats and won 15.So, that's the balance of power between Pas and Umno in Johor.State seats :            Pas 4, Umno 32Parliament seats :  Pas 0 , Umno 15