The hot story at the moment is the 1.5 million Bangladeshi issue.

So many people seem to be very unhappy about it.

It's all over the cyberspace.

So, no need for me to put the background here.

Last time I checked there were almost 6 million foreign workers in the country.

That was the combined estimate of the legals and illegals.

So, what's the fuss if we add another 1.5 million?

That makes it about 7 million.

More than double the size of Malaysian Indian population, I think.

But these new ones coming in are Bangladeshis, and they are taking up jobs that most Malaysians rather not do - cleaners, plantation coolies, etc.

Something like what the early Chinese and Indians migrants did which the locals at that time were not keen to do at first - tin mining, rubber tapping, etc.

But I don't think these Bangladeshis want to stay here....aren't they?

How many Bangladeshis have obtained Malaysian citizenship all these years?

I know a lot of Indonesian migrants who managed to do so, but Bangladeshis?

I believe most of them went home after making enough money here.

Are they troublemakers? Prone to commit crime? Have the habit of seducing local girls and taking them back to Bangladesh?

I don't know about you all, but I think Bangladeshis are generally rather docile.

They even hold each others hand in public. 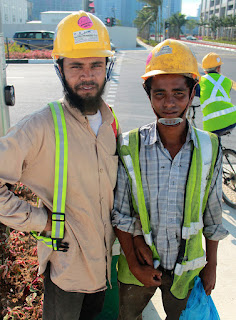 Really, they are not gays, okay.

And most of them are good Muslims.

Ever heard of a top Bangladeshi terrorist?

Really, I don't mind them that much.

They are probably at number two in term of foreign workers' ranking in my chart.

Number one are Nepalis, whom I find to be quite disciplined, courteous, and dedicated to their work.

It's always nice to be saluted by an immaculately uniformed Nepali guard at a car park of a shopping mall.

Ideally, it's better not to be dependant at all on foreign workers but we have to admit that we need them now to do jobs that the locals are not interested to do.

Of course priority should be given to Malaysians if they need the jobs but if no one among them is interested to do it, then I think it's okay to take in good foreign workers to fill up the vacancies.

That has been the practice for quite a while now, anyway.

We just need to properly regulate their intake to minimise the social costs.

Maybe a law should be enacted to compel employers to do their best to recruit locals for the jobs before resorting to hiring foreigners.

For instance, make the pay more attractive for the locals.

I think employers should be made to do that for the country.

And of course, we should send foreign workers back to their country after they had done their job and earned what they deserved here.

One more thing, don't let anyone abuse the arrangement of hiring foreigners to make excessive profit at the country's expense.

I also think that it's better to spend more energy and time at getting rid of trouble makers among the foreigners such as the drug smugglers, con artists, etc, rather than kicking up a fuss over those who want to come here to earn an honest living and help us build this country.

See, I don't think it's really that bad if we manage things properly instead of just getting emotional about things like this.
Posted by Annie at 13:23