Not an easy job

So, they blocked The Malaysian Insider.

Somehow I was not really surprised when I heard the news yesterday.

In fact, I think more will come.

That's how things are of late.

Whatever it is, TMI which is an anti-establishment news organisation had been pushing its luck too much anyway.

I do wonder though what happened to all the talks that Umno is buying the portal and such.

TMI was said to be on sale.

Guess the story was not true.

I also wonder what is going to happen to the journalists working for TMI.

I have a few friends there.

Will call them later today to find out.

Hopefully they are okay.

It's not easy losing a job especially now that the economy doesn't seems to be doing too well.

Really, on the ground, things seems to be getting a little tougher despite all the good projections and everything.

The other day, just before CNY, another prominent portal, which however is a pro-establishment, got into financial troubles and ended up not being able to pay the salaries of its staff.

I lent a bit of money to a journalist friend working there so that he could celebrates CNY.

It's now past Chap Goh Meh and his salary is not yet coming.

I hope the TMI journalists will not suffer too much like my friend.

But then again, maybe the blocking is just a temporary thing.

Maybe TMI will be operational again as usual in a month or two.

I think it just need to change its editorial policy a bit and things will be okay again.

Maybe TMI will do so accordingly later.

Whatever it is, for me, that's the fact of life in Malaysian journalism.

You push your luck with freedom of the Press to the limit.

The trick is, for you not to break it.

Every good journalist in this country does that.

Even those working for pro-establishment news organisations do it.

Bear in mind that the majority of TMI journalists formerly worked for the extremely pro-establishment New Straits Times.

Being a real journalist is indeed tougher than being a blogger or other social media practitioners.

While bloggers, facebookers and such normally have other sources of income, most journalists rely on just their job to earn a living.

If the news organisation they work for shuts down, then they simply have to suffer.

And they have to work by a tougher standard of scrutiny.

Anyway, as the saying goes among my journalist friends, 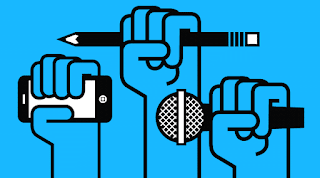 Maybe they can replace the word "pen" with "keyboard".
Posted by Annie at 07:11