No more joking around soon

I think the fight is almost over.

The news portals as they are now are dying.

They are running out of money.

Their funders are backing out.

Talk to all those online reporters and you will know that it is true.

I talked to them.

New people are taking over, they said.

Also, it was reported that they will table amendments to the Communications and Multimedia Act in parliament next month.

After that, you all need to be extremely careful with what you write in cyberspace.

"Our leaders are smelly monkeys"

which is more or less okay now as it's deemed as just an expression of your displeasure with our leaders.

The statement is quite general, anyway.

However, after the amendments, if you write such words, you may likely go to jail for defaming the country's leadership.

No more shooting off your mouth.

Well, I think I have to tighten censorship of your comments in this blog too.

May even have to remove some of your comments which have already been published.

Heck, if it's too difficult, I may just close down the whole bloody thing.

Just not worth the risks anymore, okay.

Anyway, most of the other bloggers that I know have already started to do all these.

Nothing wrong with that though as blogs belong to their owners and it's up to them to decide on what it's going to be.

Actually, I have already started doing the censorship myself.

But almost all the comments which I spiked off so far were due to their stupidity and not because of anything else.

Can you all stop wasting your time after this by not posting comments which I will only have to spike off later?

Whatever it is, I guess freedom of speech and expression has its limit and Malaysian cyberspace has reached exactly that.

No more jokes about Ahmad Maslan, for you all.

In my case, no more jokes about Lim Guan Eng. 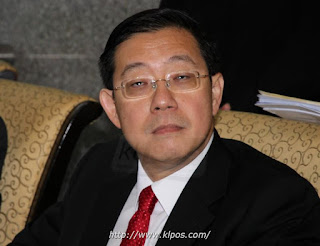 As CM of Penang, he is our leader too, isn't he?

Gonna be North Korean boringness after this, I think.
Posted by Annie at 08:10