reminds me of what happened a few years ago.

When I was in Johor back during the run-up to the 13th general election, I realised that Johor Umno and its Barisan Nasional allies in the state did not seem to have a proper cyberwar strategy.

I asked the people working for then Johor MB TS Abdul Ghani Othman why they were not putting an effort to recruit cybertroopers for that purpose.

One of them explained that it was very expensive to do so and the effectiveness of cybertroopers supporting BN was rather suspect.

"We simply don't have the allocation to do that. There's also the risk that if we can't deliver what the cybertroopers may want later on, they are going to attack us," he said.

I asked him how come then Umno in the other states managed to have teams of cybertroopers to carry out cyberwar efforts for them.

"Honestly, I don't know where they got the money to do that. It could costs millions of ringgit. We in Johor don't have that kind of money," he replied.

I asked again about the possibility of getting volunteers or sponsors.

"We do have volunteers but they are not prominent bloggers. That's why you don't see them much in the cyberspace. The prominent ones mostly needed payment. As for sponsors, I think you are referring to getting some towkeys (businessmen) to pay the bloggers. Well, if we do that, then we will owe the towkeys and later on we have to give them what they want. That is a form of corruption and as you know my boss (Ghani), he will never agree to do that," he said.

Johor Umno at that time compensated its lack of cyber muscle with hard work on the ground such as meeting the people constantly and trying to solve every possible grouses of the rakyat from clearing clogged drain to providing assistance for the poor, irrespective of race and religion.

I was later made to know that Ghani actually had came under attack by some pro-establishment bloggers because his people declined offers of services (which needed to be paid).

After speaking to the Ghani's people, I had a discussion with two friends Ai and Tinsel.

We decided to be volunteers for the Johor Umno's cyberwar efforts.

Ai, who is the best writer among us was the leader of the project.

It so happened that Ai was around that time being urged by a prominent blogger to set up a blog to help BN.

The blog that we set up is BIGCAT

Ai was the main writer, Tinsel handled the technical side of the blog and me being the least talented mostly just provided the crazier ideas of what to write

The blog I believe was not so bad.

We were quite happy to do our bit for Johor Umno at that time.

At first, Ghani's people couldn't care less about our rather unusual blog but later on admitted that it helped them a bit in explaining things and defending Umno and BN in the state.

When Ai had to leave the team due to personal issues just before the general election she asked Tinsel to take over the blog.

She asked me to set-up a new blog instead.

I was at first reluctant because I'm not a good writer, but Ai said I should just write from my heart and be damned with everything else.

It was her style and I copied it.

I also stick to Ai's blogging principle - never take any payment or order from anyone.

Write sincerely or don't write at all.

Believe me or not, some people who know me actually thought I have became rich for writing this blog.

I laugh every time someone said that to me.

This blog has actually caused me more problems than anything else.

I tend to write from my heart and what's in my heart is not all the time good for other people.

When I put it in writing, I got in trouble.

But still I continue with it.

It's because this blog is a platform for me to make a bit of difference which I hope is good.

It's definitely not a platform for me to make money.

I know. It's quite stupid.

Maybe I am indeed stupid.

Well, some readers of this blog previously wrote in the comment section that I am a stupid blogger.

But it doesn't matter.

I don't mind being stupid if I can believe that I'm doing a little bit of good.

p.s I actually like money. Now I'm saving bit by bit for my next trip to Japan. Want to join some monkeys at hot springs in Hokkaido :-) 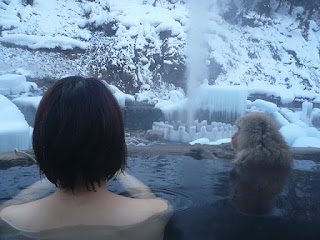