Christmas and what it's all about

Everyone I know seem to be celebrating it, including the non-Christians among them.

To learn more about Christmas, please click on this link,


Relax, it's just a link to Wikipedia.

I just believe that we should try to learn more about something that we see or experienced.

Reading is a good way to do that.

I don't celebrate Christmas despite some friends insisting that I can actually enjoy a "secular Christmas".

But I'm okay with the celebrations even if the celebrants are non-Christians.

People should be free to do that.

Despite not celebrating it, I wish my Christian friends a "Merry Christmas", and when my ex wished me that two days ago, I wished him back the same.

He's not a Christian but he is celebrating the occasion in Singapore with his family.

It's the usual end year get together occasion for them.

His new girlfriend whom I also believe is not a Christian will also be there.

When I used to be his GF, I refused to join him in celebrating the occasion because I was taught that being a Muslim, I'm not supposed to do so.

Maybe I was wrong.

Maybe if I was more flexible he would not chose to be with someone else.

Sometimes I wish I was more flexible.

But it's okay. What was done, is done.

Anyway, there are many ways people celebrate Christmas.

Again I'm giving you all a link to Wikipedia,

My favourite is this one,

Encouraged by commerce, the secular celebration of Christmas is popular in Japan, though Christmas is not a national holiday. Gifts are sometimes exchanged.[17]Christmas parties are held around Christmas Day; Japanese Christmas cake, a white sponge cake covered with cream and decorated with strawberries, is often consumed and Stollen cake, either imported or made locally, is widely available. Christmas lights decorate cities, and Christmas trees adorn living areas and malls.[17] Christmas Eve has become a holiday for couples to spend time together[17] and exchange gifts. A successful advertising campaign in the 1970s made eating at KFC around Christmas a national custom. Its chicken meals are so popular during the season that stores take reservations months in advance.[18]

The first recorded Christmas in Japan was a Mass held by Jesuit Missionaries in Yamaguchi Prefecture in 1552. Some believe that unrecorded celebrations were held before this date, starting in 1549 when Saint Francis Xavier arrived in Japan. Christianity was banned throughout Japan in 1612. However, a small enclave of Kakure Kirishitan ("hidden Christians") continued to practice underground over the next 250 years.
Christianity in Japan along with Christmas reemerged in the Meiji period. Influenced by America, Christmas parties were held and presents were exchanged. The practice slowly spread, but its proximity to the New Year's celebrations makes it a smaller focus of attention. During World War II, all celebrations, especially American, were suppressed. From the 1960s, with an expanding economy, and influenced by American TV, Christmas became popular. Many songs and TV series present Christmas as romantic, for example "Last Christmas" by Exile. The birthday of the current emperor, Akihito, on December 23 is a national holiday. Businesses soon close for the New Year's holidays, reopening after January 3.

Yup, eating KFC during Christmas is a national custom in Japan. 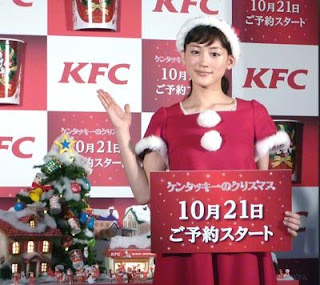 Our KFC people should take note.

Maybe they can start the same tradition here.

I'm going to have a rest tommorow.

To all Christian readers of this blog,