There has been quite a bit of excitement over the recent development related to Umno-Pas relations.

Presidents of both parties, DS Najib Razak and DS Abdul Hadi Awang had both talked about unity of the Malay Muslims on the same stage. 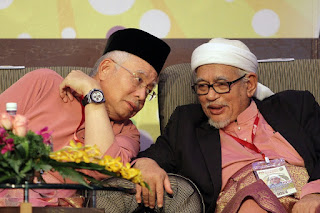 
Well, the Umno vice-president may be right on that one, but I don't think what he said will stop people from talking about Umno and Pas working together, especially for the next general election.

I think the possibility of a cooperation between the two Malay Muslims parties is real and this can ends up in the formation of an alliance comprising Barisan Nasional and Pas.

Pas may not want to join BN but it may cooperate in the alliance by striking a deal in the choice of constituencies to be contested.

I think that should be the case in order to avoid discomfort among non-Malay Muslims parties within BN which may not be too enthusiastic to have the Islamist party in their rank.

In return, Pas may likely get some quite sweet deals from BN.

If the potential BN-Pas alliance really comes true, then the following scenario may be in store for the country after the next general election.

1. The state governments of Perlis, Malacca, Johor, Pahang and Sabah will be led by Umno (BN).

2. The state governments of Kedah, Terengganu and Kelantan will be led by Pas.

3. The state government of Sarawak will be led by PBB (BN).

4. The state government of Penang will be led by DAP.

5. The state government of Selangor will be led by PKR.

6. Most parliamentary seats in the Federal Territory will be Pakatan's.

7. It is going to be 50-50 between Pakatan and BN in Perak and Negeri Sembilan. I can't say for sure who are going to win in these two states.

Kedah
Umno may likely want to remove current MB DS Mukhriz Mahathir due to his rebel tag. But this will prove to be difficult if it wants to strike a deal with Kedah Pas. Mukhriz is known to be well liked even among Pas members in the state. It will be difficult for them to accept any other Umno's MB candidate. The only way Umno may get around this is by offering Pas the post. A BN-Pas alliance will certainly be a winner in this state.

Penang
DAP will still rule supreme in the state even if they face a BN-Pas alliance. PKR and Amanah can count on their big brother DAP to boost their chances in the state. Nonetheless, BN and Pas candidates may win more seats than in the last general election, particularly in Seberang Prai.

Perak
Pas may not be able to help BN much in this state. Most of its strength has deserted to join Amanah. However Pakatan will not be at the same strength as in the previous general elections if Pas combines what's left of its forces in the state with BN.

Selangor
The Klang Valley is the base of the opposition against the establishment. I think the opposition will be able to hold on to this state. A BN-Pas alliance will not make much of a difference here. On top of it, Umno is in such a sorry state in Selangor that it will not be able to mount a credible challenge. Similarly Selangor Pas would not be much of a force without the votes of the non-Malay Muslims.

Federal Territory
It's going to be the same as Selangor. Most of the parliament seats of FT will still be with Pakatan. A BN-Pas alliance will mean little in the urban areas. Even more so with BN not very good at handling issues such as the Kampung Datuk Keramat affordable housing project. DAP to have the most seats.

Negeri Sembilan
It's going to be almost the same as Perak. BN, with Pas help may be able to win but not by much. It's likely going to continue being a two or three seats difference in the state assembly.

Johor
Most Johor Pas leaders have left the party to join Amanah. Therefore the alliance with BN will not make much an impact in the State. I have a feeling that Johor Umno and its current allies in the state are not really interested in such a cooperation. They may even feel that Pas will just be a burden to them. BN's immediate problem in Johor is on how to improve support among it's almost 40 per cent Chinese population. BN likely to retain the state but may lose more parliamentary seats.

Terengganu
Umno may likely give the MB post to Pas to lubricate the deal between the two parties. It has always been 50-50 between them anyway. Also, Terengganu Umno is not in the best of shape lately.

At the Parliament
BN may most likely form a coalition government with Pas. They will have a simple majority in Parliament. Najib will continue as PM with Hadi as his deputy.
Posted by Annie at 22:49