May the weather remains nice

Spent most of yesterday sleeping.

It's nice to laze around once in a while.

The weather was nice.

I took this picture from under a bunch of bamboo trees in the afternoon, 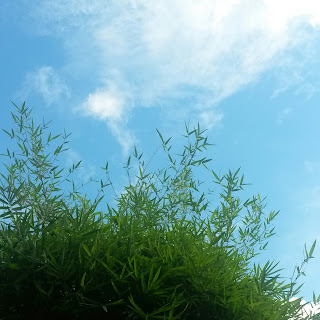 It's however now raining from time to time since late evening.

Hopefully it will not worsen.

I remember that the rain got very heavy after Christmas last year.

It led to a major flood.

Back then, I did my bits to help around.

In flooded area and pondering how to make things better


The situation was quite bad.

Tens of thousands were evacuated and so many roads including the East Coast Highway were cut off by the flood.

PM DS Najib Razak came under severe attack at that time because he was in Hawaii playing golf with US president Obama.

That was before the Umno civil war a few months later.

I was defending him, causing many to be angry with me.

But I always try to do what I think is right.

I don't believe Najib should be savaged like that back then as no one really expected the flood to get that bad.

What ever it is, my intention has never been to be popular.

During the civil war, I thought being neutral was the right thing to do.

Taking side will only worsen the whole thing.

That's how I see it.

Of course I got whacked by both sides.

That's part of what I have to put up with as a blogger.

On my way here on Wednesday,  I came across a convoy of four-wheel-drive vehicles carrying boats and equipment, likely for flood relief operation.

They were from the Civil Defence Department.

I guess they were making the necessary preparations in case there will be another major flood.

Good of the authorities to be more ready this time.

Nonetheless, I still hope the weather will be kind and we don't have to go through another disaster like last year.

Riding back to KL on Sunday.

Wish I don't have to.

It's so nice here.

But I have to earn a living and that's in KL.

Okay, I'm going back to sleep.