Everyone seems to be writing about the Budget 2016.

Some even cut and paste the entire budget speech of PM DS Najib Razak....as if anyone wants to read the whole thing.

The newspapers are choked full of it.

So, I don't really feel the urge to write too much about it.

Suffice to say, that the budget was not too bad.

It's a budget any good government would formulate under the tough circumstances caused by the current global economic uncertainties.

I'm still not comfortable with BR1M though.

I wonder how long the government is going to keep on giving handouts like that.

Feel such practice a bit third world for Malaysia.

Nonetheless, I received this Wassap message from my friend in Kuantan yesterday,

She was telling me that under Budget 2016, the monthly disability allowance given by the Welfare Department to her son (MH) who has autism was increased from RM150 to RM200. 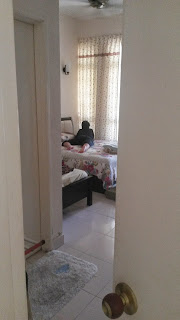 Well, not so bad.

My friend is the one I highlighted in this post,

Meanwhile, aside from the budget, there's this story by Bernama yesterday,

Inspector-General of Police (IGP) Tan Sri Khalid Abu Bakar denied allegations by certain quarters the police did not investigate the former prime minister's remarks."The fact that we did not summon him (Dr Mahathir) does not mean there is no investigation. The investigation is underway and he will be summoned to give a statement when needed."We opened investigation papers after receiving police reports that he (Dr Mahathir) had said several UMNO members received incentives, and not for his involvement in the Bersih 4 rally," he said after closing a Master of Social Science (Police Studies) and Investigative Science Diploma course 2013/2014 here today.He was commenting on a statement by Deputy Prime Minister Datuk Seri Dr Ahmad Zahid Hamidi yesterday, that the police had opened investigation papers on complaints lodged against Dr Mahathir.Ahmad Zahid had said that of the three investigation papers opened, two involved ongoing investigations while another was referred to the Attorney-General's Chambers for further instruction.

I hope they have enough sense not to jail the 90-year-old statesman for whatever reasons.

Everything will be lost if they are so blinded by power and do that.