Queen's Gambit and prayers for a father and his daughter

Went on a day trip north with my father yesterday.

Visited my uncle, my father's youngest brother whom I mentioned in my previous post,


My uncle was fine.

It's been almost a year now since his ailment stablised.

He was cheerful and we spend over two hours chatting.

Normally, he could only spare half of that time with people.

My father and me brought him quite a lot of his favourite food which made him happy.

I even got him his favourite one footer Subway sandwich - turkey and chicken slices, with lots of salad, pickled olives, mayonnaise, chili and wholemeal bread.

He is the one who introduced me to Subway sandwiches.

Then there were also lots of fruits for him.

I told him about watching the movie Pawn Sacrifice

His eyes immediately lit up upon hearing the title of the movie.

"Ah! The Queen's Gambit," he remarked.

It's his favourite opening Chess move whenever he plays white against me.

He told me to get a CD of the movie because he wanted to watch it.

I think I will bring along a Chess set the next time I visit him.

Maybe we can play again. It's been many years since we last played.

Anyway, I was happy that my uncle is now well enough to talk with me about Chess again.

My father seemed to enjoy meeting his brother too.

He went through quite a lot of anguish when his brother was diagnosed with the ailment.

We went back to KL after the visit and it was raining all the way home.

The haze was thick too.

My father was the one at the wheel.

He doesn't trust my driving, saying that he's scared of my driving because I tend to speed.

He's always worried about me especially when I ride my motorcycle.

My father  is a careful driver and always drive within the speed limit.

I'm now trying to drive like him, but maybe I'm still not good enough.

The drive home would had been uneventful, except for one incident.

My father was overtaking a trailer at about 110 km per hour when a motorcycle overtook us from the left before it weaved to the right in front of us to overtake the trailer at the same time.

The motorcycle must had been going at almost 130 km per hour.

I managed to snap a picture, 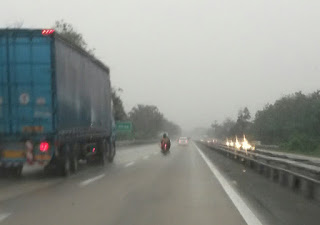 Riding the bike was a man in his 40s and with him was a girl whom I believe to be his teenage daughter.

I saw them clearly as the bike was overtaking our car.

The bike is a kapchai (small underbone bike).

And it was raining, the haze was thick, the road surface was slippery....simply dangerous for a bike that small to go that fast.

At that moment after I took the picture, I made a little prayer or two in my heart....Allah, please let the father and daughter reach their destination safely....and Allah, please make the father realise that riding at such high speed and under such treacherous condition is very dangerous and that he will not do it again.

I sincerely hope they are safe.

Okay, I'm going out to do some shopping in a short while.

I'm leaving you all with the Queen's Gambit.