He stopped reading it after he decided that he was in love with someone else.

But he still occassionally asked me to write something which he felt to be important.

It's nice to receive such requests from him even though I'm not sure whether he read what I posted later on.

They lessen the pain of missing him a bit...

Well, these are some good stuff that he wassap me early this morning. I don't really feel like writing about them as I'm having one of those difficult PMS thing today. So, you all can check them out for yourself ya;

1. This is a Facebook posting. I'm not really on Facebook but my ex is quite active there. The lady whose posting he forwarded to me seems to have a point, 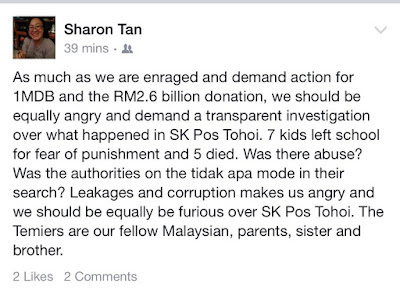 He also recommended the link to this Malaysian Insider article:

On the missing 7 Orang Asli children


I find the article to be quite good.

My ex said lots of people are sick and tired of politics as they feel that too much attention has been taken away from the real things that matter because of it.

Unfortunately, many readers of this blog seem to think otherwise.

Like it or not, the mess which is currently going on is still the hot topic of discussion for them.

2. This is another link to a good article which my ex recommended to me via wassap this morning,


And these are bits of the Euromoney article;

Zeti in her own words 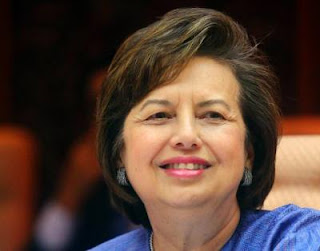 Over the course of her Euromoney interview, Zeti Akhtar Aziz touched on many subjects other than the current crisis afflicting Malaysia:

On her successor: "The governor is appointed by the king on the recommendation of the finance minister [PM Najib]. I hope the successor will be from within the bank. My three deputies have grown up in the bank too. They know the bank, they are very driven and they are very capable. I don’t know [who will be my successor], I cannot predict the future.

On the slumping ringgit: "We should not step backward and peg the exchange rate in these times. You want the flexibility to adjust." "Our economy is more diversified than what is perceived by the market. We are less dependent on commodities. The market doesn’t appreciate this. The currency does not reflect our fundamentals."

On her most recent triumph: "We signed the agreement for an integrated banking framework [in Asean] recently and that was so challenging. It took five years to get there and I’m glad it got done while I’m still here."

On the slowdown in global emerging markets:  "Growth is moderating in the emerging world but there is still growth. Asia remains an important growth centre in the world economy, so to highlight a very adverse economic outlook is not correct. Greater Asia, and Asean in particular, is showing good growth of 4% to 6%. We are not really facing major economic vulnerabilities."

On China’s economy:  "I am not alarmed by the development there. Yes, they are slowing down, but to more sustainable levels. To me, this is a period of transition for China…so as not to be destabilizing to the region. Their handling [of the slowdown] has been sound, it has had some costs, some pain has to be endured but over the medium term, it will make their growth more sustainable. They have the fiscal space to do it. The stock market is not everything. China needs to encourage stronger consumption demand. They have over-investment now."

On the global financial architecture:  "I would like to see more emerging market representation (at the IMF and World Bank). They are trying very hard to achieve better representation of the global economy given that its configuration has changed so drastically but there’s very slow progress on that. I would also like to see these agencies take a greater role during global financial crises. There’s no other international agencies that can have their role. They need to exercise and perform their role."