Celaka and babi, so overused lah

It was reported that

Loke had however denied that he used those words as per reported.


“I would like to clarify that I have never said those words. The only thing that I said was “Celaka One Visa, Celaka Anwar Yeoh”.
“One Visa and Anwar Yeoh are the owner of the land and responsible for demolishing the settlements in Kampung Ulu Temiang.
“Even Malay families have been victimized by his act. I am merely defending everyone’s right regardless of their race,” he wrote in his Facebook page.
The Jamal Sekinchan Red shirt guy had however today lodged a police report against Loke.

And while doing that


It's becoming quite childish to me.

And these are supposed to be our leaders.

Nonetheless, did Loke really utter the offending words in the first place?

Here is the video of the incident,

Unless of course if the video had been edited to make it sounds like he said those words.

You know lah, these days the technology is quite sophisticated.

Well, Loke did admit that he used the "celaka" word but not the "Melayu" one.

Why la Mr Loke did you use the C word?

Can't you be a bit more imaginative?

I think the "celaka" word had been overused by the DAP people.

The last time I wrote something about one of them using the "C" word was in this posting,

Well, I really think the handsome DAP secretary-general Lim Guan Eng should initiate a training course for party leaders on how to curse creatively and at the same time be politically correct.

Err...Umno also need to conduct the same kind of training, I think.

The "babi" word is also a bit overused lah.

I guess the ultra-Melayu among them don't realise that some Chinese don't mind that much being called a pig.

Pig is actually quite an intelligent animal and to some quite cute too.

I even have a friend whose nickname among family members is "little piglet". 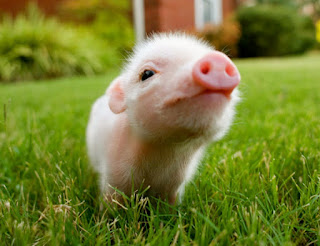