There have been quite some discussions on how DS Najib Razak took over the premiership from Tun Abdullah Ahmad Badawi.

The debate was triggered by a statement by Umno deputy president TS Muhyiddin Yassin two days ago that,

I was Najib's kingmaker, and I don't regret it

I would therefore like to recall what I remember about the whole thing.

First there was that rebellion against Abdullah which started not long after Barisan Nasional's landslide victory in the 2004 general election.

Not unlike the current rebellion against Najib, former PM Tun Dr Mahathir Mohamad was the anchor of those who wanted Abdullah to be replaced.

The main reason for the rebellion was unhappiness over the conduct of Abdullah and his people, especially the so-called "fourth floor boys" in managing the country.

Most of the current prominent bloggers are among the rebels back then.

The rebellion's ultimate effect was the dismal BN's performance in the March 2008 general election.

The ruling coalition lost Penang, Kedah, Perak, Selangor and most parliamentary seats in the Federal Territory while Kelantan remained in opposition's hand.

BN also suffered many loses in other states and it lost the two third majority in parliament.

Pressure from within Umno for Abdullah to step down mount right after the election.

Muhyiddin, who was known to be one of Abdullah's people before the election was very vocal from the start.

Najib on the other hand was more discreet.

I remember very well asking point blank a close aide of Najib who is my friend when his boss is going to make his move.

We were having a seafood dinner in Tanjung Lumpur, Kuantan at that time, just a week or two after the election.

He told me that it's not Najib's style to be abrasive in demanding a sitting premier to resign.

Things however came to a head at the first meeting between Abdullah and a state liaison committee after the election.

It was the Johor liaison committee and the date was April 11, 2008.

The rebels were very excited on that day.

This is the posting by Big Dog about the meeting;


If you click on the link to the Big Dog's posting you will notice that the report was not focused on what transpired during the press conference held by Abdullah and  Johor Umno leaders after the meeting.

It's more on what Big Dog found out from his sources who were present during the meeting and news reports quoting Muhyiddin and individual Johor Umno leaders.

That's because the actual press conference did not mention anything about Johor Umno forcing Abdullah to step down.

The Johor Umno leaders actually did told Abdullah that the grassroots wanted him to step down and he needed to present them with a timetable of the transition plan.

The Johor Umno leaders, led by the then state liaison chairman Datuk Abdul Ghani Othman however decided that what had been conveyed to Abdullah in the meeting should not be made public in order not to shame the party president who is also the prime minister.

It's adab Melayu (Malays' etiquette) not to humiliate a leader.

Thus the rather mundane press conference after the meeting.

The most direct to the point statement which revealed that Abdullah needed to step down came from Muhyiddin, who called for a separate press conference after the meeting (Please refer to Big Dog's post).

Muhyiddin was at that time hailed as a hero by those who wanted Abdullah to step down.

Unknown to many, Muhyiddin actually did not say anything during the meeting.

As reported by Big Dog, he was among the first to leave the meeting.

What had transpired at that meeting actually prompted Abdullah to ignore the urging of his people for him to hang on to power.

He had instead called for a meeting with national security chiefs throughout the country to get an honest feedback about sentiments on the ground.

The response that Abdullah got was that the majority of people, including those within Umno wanted him to step down.

Thus on July 10, 2008, Abdullah for the first time announced that he would step down by June the next year.

Nonetheless, the pressure for him to step down earlier than that deadline continues. The rebels simply can't wait for him to go.

An important incident happened in September that year.

It was Ramadhan and there was a breaking of fast function at the Saujana, the official residence of Johor menteri besar in JB.

I was present there that evening.

Najib was accompanied by his wife DS Rosmah Mansor to the function.

Muhyiddin was also there. I can't remember if his wife was present.

Muhyiddin was then the Minister of International Trade and Industry.

He was promoted to that portfolio from his previous post of Agriculture Minister by Abdullah, causing much distress to his predecessor TS Rafidah Aziz, who was reduced to be a backbencher in parliament.

It was said that Rafidah never forgive Abdullah for what happened.

Those who were present at the breaking of fast function had tea after they completed the prayers that evening.

It was then discussed on how to expedite the departure of Abdullah from the prime minister office.

The reason being that Umno and Barisan Nasional needed as much time as possible to heal their wounds from the disastrous  2008 general election.

It was felt that the longer Abdullah stays as PM, the more difficult it would be for BN to win the next general election.

A decision was then made for Najib and Muhyiddin to tag team in order to achieve the desired result.

It was said that Muhyiddin had accepted the fact that he should be the DPM and Najib the PM because he stands little chance to defeat Najib in a party election.

Najib's networking among the division leaders and grassroots support was stronger than Muhyiddin's.

The final agreement between Najib and Muhyiddin on their decision to tag-team in hastening Abdullah's departure was sealed onboard the plane taking them back to Kuala Lumpur after the breaking of fast function at Saujana that night.

Muhyiddin had hitched a ride on the plane used by Najib, who was then the deputy prime minister.

Present onboard the plane when the deal between the two was made was Najib's wife DS Rosmah Mansor.

If you don't believe what I wrote about the incident, please ask Rosmah, okay.

Anyway, the Najib-Muhyiddin tag-team went well and Abdullah stepped down as prime minister on April 3, 2009, almost two months before the actual deadline initially given by him. 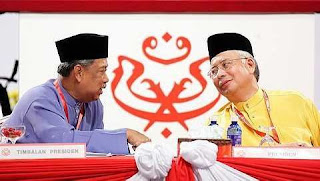 Najib took over the premiership almost exactly a year after that fateful meeting between Abdullah and the Johor Umno liaison committee which prompted the fifth prime minister to make an honest assessment of his leadership for the good of the country.