Let's give the good minister a chance

Of all the current Cabinet ministers, I feel that the most credible of the lot is DS Abdul Wahid Omar. 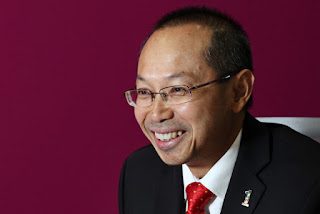 The guy is not really a politician, thus likely he doesn't sells too much bullshit or any at all.

I met him a few times and he seemed genuinely a good guy.

So, I think when he quit his Maybank job to serve in the Cabinet, it was really a national service kind of thing instead of just another opportunist making a move to enrich himself by being close to the powers that be.

Hey, there are still good people who do that, okay.

TPPA not selling the country

Wahid said accusations of him and several ministers including International Trade and Industry Minister Datuk Seri Mustapa Mohamed “selling the country” were circulating  in “WhatsApp” chat groups.
“We have no other agenda than to have the best for the country and the people. I believe Tok Pa (Mustapa) and his MITI (Ministry of International Trade and Industry) team have been relentless in obtaining a desirable outcome for the country from the TPPA,” he said in a WhatsApp message to The Mole.
“It is a norm that whenever agreements are being negotiated those involved would want the agreement to suit the interest of their respective parties.
“Every country involved in TPPA’s negotiation wants the agreement to benefit their respective country but through such process we have reached a consensus that brings mutual benefits to everyone,” Wahid said.
He added that the TPPA that has been concluded in Atlanta on Oct 5 has been greatly amended from its previous form.
In fact, Wahid said that several of Malaysia’s national policies have been recognised in the TPPA, including those on bumiputera inclusiveness, government procurement, investor state dispute settlement  and intellectual properties.
He also clarified that the agreement is now undergoing a legal scrubbing process before it can be released for public perusal.
“Everything will be tabled in Parliament and the agreement will only be signed after the house has reached a collective agreement.
“Therefore, instead of forwarding unofficial and dubious information regarding TPPA, it is best for everyone to wait until the official facts are presented,” Wahid said.

1MDB issues will be resolved in 2 months

“The prime minister had issued a statement before this saying that the issues related to 1MDB will be resolved in six months, meaning by the end of this year,” said Minister in the Prime Minister’s Department Datuk Seri Abdul Wahid Omar last night.
It was emphasised again when the government took proactive measures recently, such as selling some of 1MDB’s assets and using the proceeds to pay and reduce the debt level, said Wahid.
“This process will be carried out in a market-friendly and transparent manner,” he said on TV3’s Question-Answer programme on the national economy.
It sure looks like Wahid was sincere when he said Tok Pa and himself having done their best for the country when they negotiated the TPPA.

I don't see how someone like Wahid and Tok Pa of all people wanted to betray the country.

I do think that we need to wait and see what are the stuff to be presented to parliament about the TPPA before condemning people as traitors and such.

Let's not shoot before even knowing the targets, okay.

As for 1MDB issues to be resolved within the next two months, I hope Wahid is right.

Again, I don't see why someone like Wahid wanted to bluff us all.

If the mess are not cleared by new year 2016, then, okay go and whack the government la....and Wahid along with it.