Not expecting anything spectacular

Some speculated that there will be a boycott by several BN members of parliament to sabotage it.

It was said that together with the opposition MPs, they will try to scuttle the budget thus forcing the collapse of the government and the ouster of Najib.

I strongly doubt it will happen.

The same with the no confidence motion.

It's just a lot of hot air.

I don't think they really have the balls for it.

I believe it will be a mundane affair.

Even the budget itself will be boring, I think.

Seriously, Najib doesn't have that many cards to play around with this time as the economy is relatively not in a very good shape.

Things are currently tough not only just in Malaysia, okay.

I think Najib will have to make the budget plain and simple with the primary aim of not making things tougher for the rakyat.

Here is a report on how it will most likely going to be,

If you go to that link and read the report, you will probably agree with me.

I don't think the budget is going to be sexy at all.

But it's okay. I'm not expecting much of it anyway.

Just going to take it one at a time.

Personally, as long as I still have my job, can pay the rent and bills, buy food, have a bit of entertainment  and save a little, I think I'll be alright.

Don't want to waste too much of its bandwidth on things I can't do anything about such as the budget.

Somehow, I was mostly dreaming of the time I was in Tokyo today.

Akihabara...I wish I can visit it again someday. 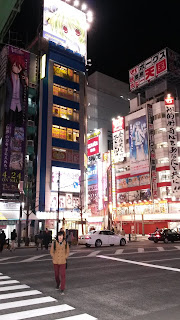 I like the place and someone told me something this morning which reminded me of it.

It's however too boring for me to write here.

Maybe some other time.

Okay, that's all for tonight. I need to sleep early.