My friend in Kuantan forwarded me these screenshots of a Facebbook posting by former TV3 journalist Khaidir Ahmad. (Note: I'm not active in Facebook) 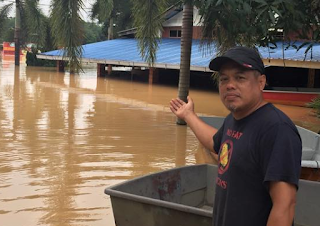 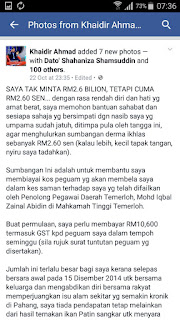 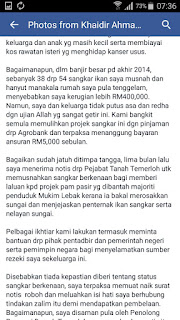 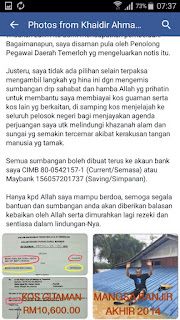 My friend had requested for me to highlight Khaidir's plight.

She's very sympathetic of him.

Khaidir is being sued by the Temerloh district authorities for protesting against sand dredging activities near his fish farm along Sungai Pahang.

He needed financial assistance to pay the over RM10,000 legal fees for the start of his defense.

Khaidir seems to be going through a bad spell of luck at the moment.

His fish farm was severely damaged in the big flood which hit the country end of last year.

His home in Temerloh was also badly damaged in the flood, causing losses of almost half a million ringgit.

I think he is quite desperate for help that he made the appeal on Facebook.

Khaidir was a good journalist.

He won the Kajai Award for his coverage of the Penan in the mid 1980s when he was the Berita Harian bureau chief in Sarawak. The award was still highly regarded among Malaysian journalists at that time as only the best among them could had won it.

Khaidir was also known for his coverage of environmental issues in Pahang in the mid 2000s, particularly about the illegal logging activities in the state, when he was the TV3 bureau chief there,

To know more about Khaidir Ahmad and his problems, please go to his Facebook page at,