There will never be another Dr Mahathir (updated)

For the latest from Dr Mahathir, please click this link

WHO’S BEHIND THE CRISIS

It's a tiring day for me today.

There were already plenty of those in the other blogs at the moment anyway.

Just want to write a bit about something more mellow.

I'm usually in mellow mood at this hour before I go to sleep.

Okay, this is about the first time my heart went out to former PM Tun Dr Mahathir Mohamad.

It's probably one of the reasons why I can't stand people attacking him.

I was quite young when it happened and admittedly, I was not really a fan of the guy at that time.

From what I read about him back then, I thought he was too hard a man and not such a nice prime minister.

It happened that afternoon I was at the house of a person who had just died of an illness.

The place was in Bangsar.

There were not many people yet there to pay their last respect except for family members of the deceased.

Dr Mahathir, who was at that time still the prime minister arrived shortly after me.

It happened that the deceased was his friend.

Dr Mahathir was apparently attending his horse riding session at Mount Kiara when he was informed of his friend's death and had rushed to the house from there.

He was wearing a checkered shirt and jeans.

He was also still wearing his horse riding boots.

I was standing near the gate of the house as i observed his arrival.

There were only two bodyguards with him.

He performed the ablution at a pipe outside the house before going in to offer his prayers and pay his last respect.

He was inside the house for a while before coming out again.

I noticed that he appeared shaken and looked drained.

The bodyguards who were waiting for him outside the house immediately ushered him to a chair at a corner of the porch.

They must had feared that he may passed out.

Once seated, Dr Mahathir waved the bodyguards away.

It was at that moment for the first time I really realized that Dr Mahathir is actually an old man.

He really looked his age as he sat alone on that chair looking so sad and tired.

At that moment I remember telling myself that Dr Mahathir is just like any other guy.

He is just human after all.

The guy got feelings and he is definitely not a fake.

Ever since that day, I look at Dr Mahathir differently.

Whenever he looked sad, I know that he was not faking it.

For me, he is as sincere as a man could possibly be.

As to why he is attacking PM DS Najib Razak now, I believed that he is doing it because he was worried that the prime minister is not doing good enough for the country.

I think he was worried the country will come to ruin should Najib lead Barisan Nasional to a defeat in the next general election.

He must have made careful assessment and consideration before embarking on such a perilous endevour.

Whatever it is, even if Dr Mahathir was wrong about the whole thing, I still sincerely believe that he is doing it for the country.

The man is almost 90 years old, for goodness sake.

What else there is for him to wants.

He clearly doesn't mind at all for his legacy of building this country to what it is today be torn to shred if that's the sacrifice he needs to make.

He surely knew that his children will likely have to suffer setbacks in their life because of what he is doing now.

That's why I think  everyone who are against him now shouldn't be too hard on the old man no matter what.

Even if I ever decide that Najib is right, I can never stop from defending Dr Mahathir whenever anyone attacks him excessively.

These days, I always worried that his struggles may take a toll on his health.

Then there is also his soulmate Dr Siti Hasmah Mohd Ali, who is also of his age.

I'm worried that she may also suffers along with him.

One day, which I hope a long time from now, when this grand old couple are no longer with us, I think many who are now being so unkind to them will regret what they did.

There will never be others like Dr Mahathir and his wife. 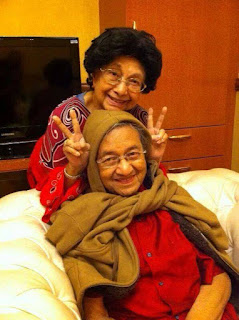