A weekend alone in Penang

I drove up to Penang for the weekend on Friday evening.

Just wanted a change of environment to recalibrate myself.

Been a bit stressed out of late.

It was a pleasant drive.

I was going at an average of 140km per hour all the way.

It's really a good car. Nice looking and the handling was superb.

Stayed at a seaside hotel near Batu Ferringhi.

I didn't fast though. It's that time of the month.

I look so Chinese that no one bothered me as I ate alone in the restaurants.

But most of the time I spend those two days at a beach.

Got myself a spot under a tree, spread a mat, and just laid down there with a book.

But I always ended up sleeping there.

A nap under a tree by the beach is heavenly.

It's nice to forget about everything else.

As someone said to me the other day, I was a bit too caught up in the negative mood of the Umno rebellion.

But I believe that it's over now.

The rebellion is effectively over after the Umno supreme council decided on Friday to continue with Najib as their party leader ahead of the next general election.

There's really nothing for the rebels to fight for anymore.

They had failed to oust Najib and replaced him before the next general election.

I can also stop from being bothered by it.

Well, that at least until the next general election.

If Umno and its BN allies still perform poorly, then the rebellion can start again.

Of course that is, if Umno and BN survive the polls.

If they lose, then we all better get ready to be ruled by the likes of this guy. 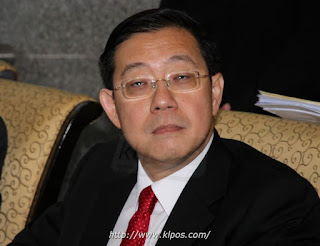 Then the rebels don't need to rebel anymore.

Honestly, I don't think Umno can survive without being in power.

I don't know yet whether I'm going to continue writing this blog in support of BN until the next general election.

It depends on my mood.

Well, to those who have been complaining about my mood swings in this blog, I really apologize.

You can find this kind of posts quite regularly in this blog.

I'm not one of those clever sopo bloggers who prided themselves in writing clever stuff and knowing everything and everyone in the Malaysian political scene.

I instead just wrote whatever there were in my heart and those crossing my brain.

Sometimes I actually wrote nonsense to make myself happy.

I hope you all can understand.

Anyway, the weekend in Penang was quite alright.

It's nice to go on a solo road trip once in a while to clear the cobwebs in my brain.

Oh, and I didn't bump into the Chief Minister while I was there.