I have not been writing about my home state Johor for quite a while.

Honestly, I was a bit tired of bitching about how things were there on my own.

Everyone, including the other Johorean bloggers didn't seem to care too much, so why should I.

This is the last Johor-related post which I wrote on Feb 26,

Since then I heard Johor MB DS Mohamed Khaled Nordin had hired some good people to help him improve his administration.

The names appeared to be good as I know one or two of them.

So, I thought I should give Khaled a chance and stop bitching about his administration for a while.

Unless of course if I heard anything freshly rotten.

Anyway, what I really wanted to write today is about the Tengku Mahkota Johor versus DS Nazri Aziz issue.

Actually, I had rather stay out of it because of personal reasons, but since someone I respect asked for my opinion about it this morning, this is what I think,

1. TMJ shouldn't make that remark about the #nothing2hide thing as being a royalty he shouldn't be involved in politics. 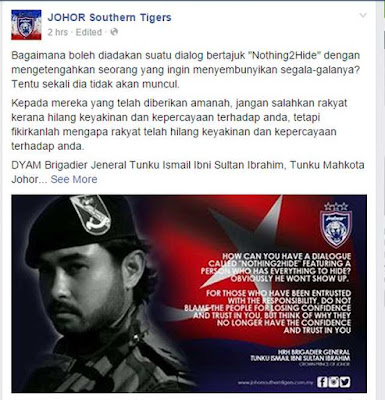 2. Nazri shouldn't behave the way he did when voicing his displeasure about TMJ's remark because no matter how much he disliked TMJ's opinion, he should know better then to use such a harsh language on his royal highness.

Stay out of politics or we'll 'whack' you, minister tells Johor prince

Many Johoreans had since taken to cyberspace to express their anger towards Nazri in defense of their beloved TMJ.

Some, being supporters of Tun Dr Mahathir Mohamad were quick to point out why didn't Nazri say anything about the Sultan of Pahang's support for PM DS Najib Razak.

That's quite awkward, as pointed out by the Apanama's blog posting,

Yes, I'm of the opinion that the prime minister shouldn't talk about the support given to him by the Sultan of Pahang.

I also have to say here that I disagree with Dr Mahathir for saying that TMJ was just exercising free speech when he made his remarks because being a member of the royalty, his royal highness should know the impact of his remarks on politics. The same goes for Tuanku Sultan of Pahang.

There, I have said it.

Okay, things seem to get worse now in Johor with several members of the state government getting involved, 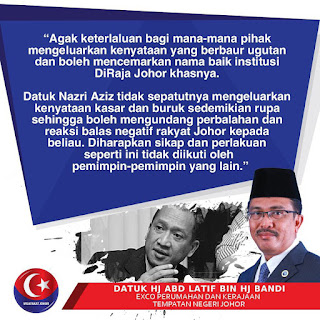 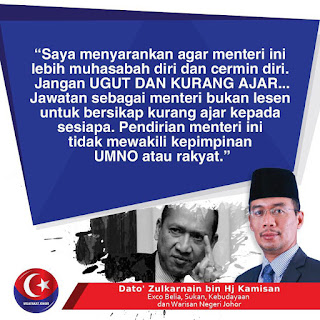 I think these state executive council members should stay out of it as their statements will only make things worse.

I know that they were probably worried that many in Johor may not like it that Nazri, being an Umno guy had sorts of pick up a fight with the popular TMJ, but they should also remember that collectively, they need to support their party president who is the actual target of criticism of the royal highness.

Either that or they should declare that they no longer support Najib as their party leader.

Well, that's if they really have the balls lah.

Okay, I know, it's the popular thing to do in Johor at the moment, but considering the circumstances, they should just keep quiet for the sake of their integrity as Umno leaders.

I think Khaled as the MB and state Umno chief should remind them of that.

Otherwise, he and the other Johor Umno guys could be deemed as rebelling against their party president.

On another front, a member of the Johor royal household has this to say today, 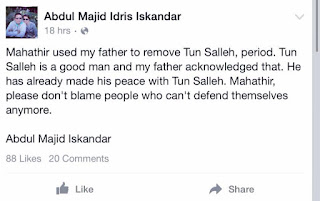 The younger brother of the Sultan of Johor must be referring to this statement by Dr Mahathir,

I don't know how it could be fixed but those in power really need to do something as the whole mess doesn't look so good for Johor.

Note: Please be careful with your comments to avoid being seditious.
Posted by Annie at 14:30