It was quite an anti-climax tonight.

I was actually waiting for the big news from KLIA with much suspense.

The hype was quite exciting; DPM TS Muhyiddin Yassin was to make an important announcement once he landed at the airport about 9pm.

A huge crowd was also expected to greet Muhyiddin. 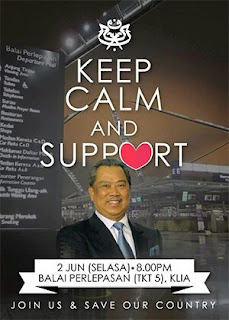 However, the first story which I saw just now was that by The Rakyat Post,

That's rather embarrassing considering that the welcome home event was supposed to be the big spark in the rebellion against Najib.

Then I saw this story by Malay Mail Online,

Cries of 'Save Malaysia' greet Muhyiddin at airport

Okay, this one is a bit better for Muhyiddin. It reported that about 100 people welcomed Muhyiddin home.

Still, I was expecting thousands of people to be present.

I can't help but to think that either someone in Muhyiddin team screwed up with the planning or it was actually a clever trick by the opposing team to discredit the DPM.

Personally I prefer the second scenario.

Who knows, maybe Najib's people had suddenly became very clever and capable of executing that slick move against Muhyiddin.

The first scenario on the other hand should means only two things;

1. Muhyiddin's people are not anymore capable than Najib's people .
2. The rebels were too lazy that they were not even bothered to greet Muhyiddin at the airport despite the hype.

Ya, the first scenario is rather pathetic, therefore I prefer the second one - Najib people have become clever.