First, let me say that I don't watch too much TV, except the Astro's cinema and cooking channels during weekends.

I hardly watch the free channels.

TV3 is now running a smear campaign against national car Proton or to be more truthful, trying to destroy the legacy of former PM Tun Dr Mahathir Mohamad. 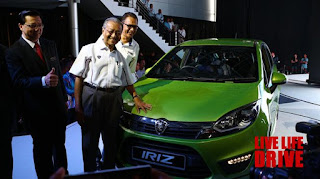 Do excuse me as I feel the need to be direct to that point.

However, it's so stupidly and tastelessly done that I think it will only further reduce the support for DS Najib Razak whom Dr Mahathir was trying to remove from the PM office.

Well, too bad for you Mr PM. Your people in TV3 are too lazy to do things properly...or is it that they are so lacking in talent that they don't know how to do it better.

I cringed when someone showed me a clip of the TV3's Bulletin Utama on how it was done.

Now I wouldn't say that I don't watch TV3 anymore, but instead I'm avoiding it completely.

Sorry to the ordinary folks who work in TV3, but I just can't bear watching the whole thing.

I totally agree with what Rocky wrote here,

No "balik kampung" ad for TV3 this year

So, for Proton, I decided that I'm giving it a bit of free advertisement on this blog page..

I know it's not much but I'm trying my best to support the national car.

As for TV3, I don't think it needs the help of an insignificant anonymous blog like mine.

It's big, strong and powerful.

It can survives even if no one is watching it....at least that's what the powerful media bosses, advisers and consultants thought.

They must have thought that it's a channel where they can air all the garbage and the orang kampung will swallow it all.

Very clever of them.