Hopefully KJ is not a rebel (updated)

I only realized that Defence Minister DS Hishammuddin Hussein has become the first to confirm Raja Petra's claim when I read this comment by Rocky;

It turns out that RPK and Utusan Malaysia reported the truth - the PM did invite his Cabinet Ministers who are not with him on the 1MDB to quit. His cousin Hishammuddin Hussein has also confirmed this via his Twitter, something about supporting the PM with conditions (well that's Hisham and that's another story!)

As for using the Jews in this posting, well, I'm just quoting Tun Dr M, guys. Just like most of you, I was boycotting Starbucks for a while, too, you know :-))
8:55 p.m.
Upon checking, I found that Raja Petra had also just now wrote that this is going to be
Hishammuddin’s last 48 hours as a Minister

Now, all those who used to accuse that Najib's cousin of being a coward, spineless, menteri amaran or even a pondan surely have to eat humble pie.

Hishammuddin seems quite brave to me now....either that or he was actually not sure what he was talking about when he twitted that conditional support thingy.

There were lots of talk today about Raja Petra's claim that PM DS Najib Razak had given the ultimatum for his Cabinet ministers to either support him over the 1MDB issue or resign from their post.

You can read it here:
Najib asks his cabinet members not with him to resign

Major newspapers such as Berita Harian and NST gave prominence to the story about Raja Petra's claim today.

It was a bit weird that those newspapers had to rely on a report by Raja Petra who is in self-imposed exile in London for such a major news break.

Surely, the newspapers have better access to "insiders" within the Cabinet and could had broke the story themselves.

Well, never mind...the fact that the newspapers reported the claim indicated that there should be some truth to it.

Maybe the newspaper people are a bit shy to use their own story about the whole thing.

Whatever it is, I think they should get a confirmation of the story so that it can become irrefutable fact.

Maybe the journalists should just asked the Cabinet members or the PM himself point blank about it.

As I'm writing this, I haven't seen any confirmation yet from anyone.

Still, I tend to believe that there should be some truth to Raja Petra's claim.

After all, I think that should be the right thing to do on the part of the PM.

He needs a ship with all crew members following his orders.

It's the natural thing.

Really, I would have quit if I don't agree with what my boss is doing. I just get myself another job.

I had heard rumors that the two guys had been identified as heading a quiet rebellion against Najib.

I find that a bit weird though as I don't think Muhyiddin and Shafie have enough clout to challenge Najib for now.

But still, I think those two and others being suspected of rebelling against Najib should make their stand clear.

They should either openly declare that they are all the way with the PM over all issues including 1MDB or quit their post in the government.

They can meanwhile keep their post in Umno and challenge Najib in the party elections scheduled next year.

Of course they have to prevent the party from postponing the party elections to after the next general election.

Well, they can try, can't they?

As the Malays say it "Berani kerana benar....", something like that.

Somehow, however, I hope Umno Youth chief Khairy Jamaluddin will not be among those who oppose Najib.

It's a pity if the tall, dark and handsome guy resigns from his ministerial post. 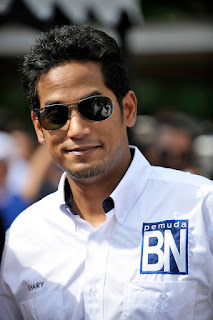 I don't think Umno has anyone better to replace him as Youth and Sports Minister.

He is also good with the older people.