This is Erich Hartmann, 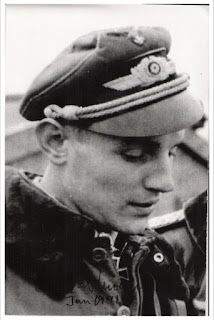 I first read about him when I was in school.

Hartmann was a German fighter pilot during the Second World War.

This is an illustration of him flying in his "Black Tulip" fighter, followed by his wingman, 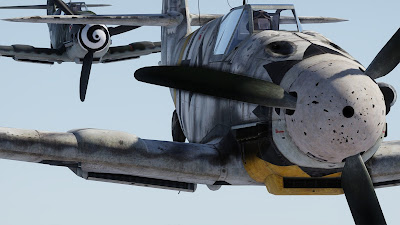 Not exactly my favourite WWII fighter.

There were better others.

But Hartmann preferred to fly only Bf109.

He shot down a total of 352 enemy aircrafts, the highest score ever recorded in history

It's exceptionally high even by the standards of WWII.

Considering the nature of current and likely future air combat, his feat was likely never be matched by anyone else.

But Hartmann fought for the losing side in the war.

He was imprisoned in the then Soviet Union for over 10 years after the end of the war and was among the last German prisoners of war released from captivity.

You can read more about him at this link:


The story of this "Ace of the Aces" fascinates me when I was a kid.

It leaves a strong impression on me.

May sounds stupid in our materialistic world today, but I like those things.

Anyway, Hartmann's story to me is much better than the story of current Malaysian politics.

There are actually so many other better stories out there than all the nonsense that those people want us to believe.

At the moment I prefer reading or writing about people like Hartmann than about Dr Mahathir, Najib, Lim Guan Eng, etc.

How I wish I can do things like flying and shooting down my country's enemies like the guy instead of mostly just bitching day in day out.

Previously I thought I was sort of doing the same by writing this blog, but now I think I was just stupidly bitching along and nothing more than that.

Next time, I should write better stuff.

That's if they don't shut me down first la.

What? Najib stole all those money?

If he really did, let's pray for Allah to make him choke to death on all those ringgit.

Well, what else there is for us to do, isn't it?

Dr Mahathir and the rest had done everything that they can what.

Najib insists he's innocent and wants to stay in power.

And he has the power to do that.

What more can you all do other than making noises and praying?

Other than that, just wait la for the general election.

Realistically, that's all there is to it.

Life has to go on for now, okay.

Need to do the necessary to go on living.

Well, need to get up now and get ready for the day.

I'll write again when there are something really worthwhile to write.

This blog is slowing down a bit.

Or maybe just not motivated or inspired :)
Posted by Annie at 07:51