Woke up at about 5am.

I slept quite early last night.

Checked the phone and saw this image sent via Wassap by a friend who was a senior editor in the now closed The Malaysian Insider. 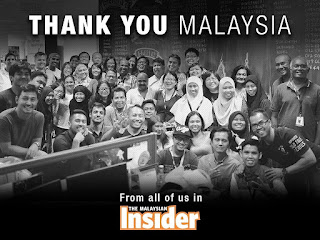 He sent it to me at almost 1am.

Just right after the portal closed down at midnight.

I know quite a few of the faces in the picture.

At least they are still smiling despite losing their job.

These guys are actually my "enemies" in my fight to defend Umno and the establishment all these years.

You can check the archive of this blog and noticed that I had really nothing good to say about TMI.

But still, to see them shutting down makes me a bit sad.

I rather argue with them then shutting them down.

I actually did just that here,

After all, I believe that the outcome of the war to win the hearts and mind of the people will be decided by the people themselves.

I believe that the people will decide based on whom they like better.

The perception now is that TMI closed down because of the recent blocking of its website by the government after it published a not so nice article about PM DS Najib Razak.

In my opinion, it makes BN looks bad.

It doesn't matter that the TMI bosses and the portal's owner had announced that it had to be closed down due to commercial reasons.

I think it wouldn't be so bad if they didn't block the portal's website that day.

That to me, was a bad decision.

Why can't they just argue better than the TMI people?

That way, the people can see the truth and not think of the government as being the bullying type.

Actually, even suing and bankrupting them in court is better.

Anyway, I believe that if not for the blocking, the people would have accepted that TMI had to close down anyway because it's financially bleeding.

After all, the local online media is suffering now.

I first wrote about it here,

Well, another version of the story that I heard was that the TMI bosses decided to scuttle the portal rather than letting it fall into the enemy's hand.

Don't know lah....that one you all better check with the now former TMI people themselves.

Okay, I need to get up and get ready for the day now.

Have a good day everyone.
Posted by Annie at 08:06