A nice melancholic movie and other small stuff

Had dinner with my mother.

She was on her way to Singapore and stopped here to see me.

I had not seen my mother for quite a while.

She's always busy with her work in KL.

Sometimes I wonder how my father could stand her not being around most of the time.

He loves her very much despite all that.

That's why she is down here to visit my grandparents who are currently at my big aunt's place in Singapore.

Anyway, today I got no mood to write about politics.

It's the same ding dong as always.

Nothing really worthwhile to write.

Good that I'm not being paid to write this blog....unlike some people.

Otherwise I would have to cook up something to justify the payments.

Malay unity, resistance against the enemies of Islam, etc.

These days, all sorts of people are writing about those.

Sometimes it gets quite hilarious because I knew what the writer who wrote such stuff was really all about.

Still, I don't mind it that much.

Everyone has to make a living, okay.

Well, let them be lah.

Actually, just before I started writing this, I just finished watching the last portion of the movie, 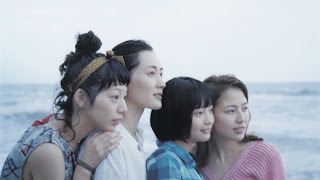 It's beautiful and really heartwarming.

I've been watching it online bit by bit since yesterday.

For me, it's about coping with being left by our dearest beloved and staying strong without being judgemental for the days to come.

I love this type of Japanese drama movies.

The pace may be a bit too slow for most people here, but I don't mind it at all.

It gives me time to enjoy the smaller details of the movie.

It makes the movies so real.

There's this certain pleasant but melancholic feeling whenever I'm watching them.

Honestly, it's the same feeling I got when I was traveling around Japan,

Something to do with the Japanese landscape and the way of the people there, I guess.

Unlike some lucky people, I have to actually get up in the morning and go to work instead of just writing about penyatuan umat Melayu bagi menentang musuh-musuh Islam....or something like that :)