Not letting anything to spoil my mood

Someone asked me yesterday why I didn't write proper postings on the jailing of DS Anwar Ibrahim and the death of Datuk Nik Abdul Aziz Nik Mat.

Well, as for Anwar, I felt that the least said about him, the better.

Despite all the noises that his family and supporters are making, they can't seem to get the attention of the people.

It's nothing like the Reformasi days of the late 1990s.

On the night before the Federal Court sent him to jail for sodomy, Anwar's final round of roadshow to garner sympathy at Padang Timur PJ attracted less than a thousand people.

You need to be there to believe it.

On the passing of Nik Aziz, I didn't want to write about it due to two reasons.

1. The man had passed away. A posting on it would had invited negative comments which I wouldn't like to publish.

2. I don't really know Nik Aziz. I only met and talked to him once. That's making me unqualified to write about him as if I really know him.

Anyway, I am back in Kluang now for the coming Chinese New Year.

Drove back from KL with my mother and one of my aunts yesterday.

My mind now is on the celebrations.

That's another reason why I don't want to spoil my mood by writing about Anwar and the late Pas spiritual leader.

Spent the whole day helping my grandmother cleaning the house.

Now tired and about to sleep.

I am in this room which used to be my mother's room when she was a young girl.

One of these days, maybe, I will write about her.

The story of my mother is actually very interesting.

I am quite confident it could be turned into a movie.

It got more drama than Anwar's story.

Well, she is in the kitchen now playing mahjong with my aunts. 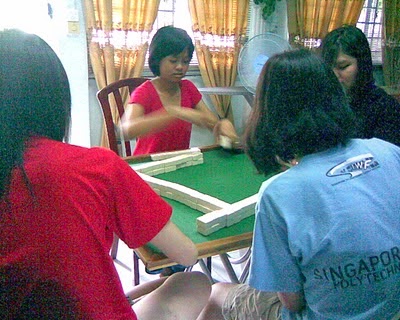 I can hear the clicking of the mahjong tiles from inside this room.

Actually, my mother is a poor mahjong player.

She always lost a few hundred ringgit during CNY.

It's just for fun, she would said.

Gambling a bit at the mahjong table during CNY is a tradition in my mother's family.

My mother said playing mahjong is a way for her to bond with her family members.