The big story yesterday, today and probably tomorrow is about DS Anwar Ibrahim going back to jail.

You all had most likely read almost everything about it by now.

The story is everywhere.

Even the questions related to the whole thing had been thoroughly examined.

Actually there are not much left for me to write about which hadn't been written by others.

Still, let me share a thing or two about what I think of the whole thing.

Well, some were satisfied while others just can't accept the judgement of the Federal Court.

There are also who said that they do not accept the judgement but deep inside are glad that Anwar is now back in jail.

I suspect that Pas president DS Abdul Hadi Awang and his ulama gang in the party are among those in the last group.

Hadi, who has been under attack by the Anwarinas in his own party is likely glad despite his statement deploring the court's decision to send Anwar to jail.

That leaves the Pakatan gang in another fix.

Who is going to replace Anwar as the lead man of Pakatan?

DAP adviser Lim Kit Siang or his son Guan Eng can't be the person despite the party having the most seats in Parliament among the Pakatan parties.

It will just make Pakatan being too Chinese centric as they go into the next general election.

Pas definitely will not agree, especially now that the party and DAP is fighting over hudud and the plan to hold local government elections.

Likewise, Hadi can't lead Pakatan too as the Chinese will not be very keen to have an Islamist on top of the coalition of their choice.

That leaves it to PKR again.

By right it should be their party president DS Dr Wan Azizah Wan Ismail.

But the Pakatan people will not be too wise if they choose her to lead them into battle in the next general election.

She is just not a politician, plain and simple.

Listen to her mostly very short speeches and you will agree with me.

They mostly revolved on how sad she is that her husband had been the victim of BN's conspiracy and such....and that's about it.

No way she can hold the Pakatan coalition together, especially now that Pas and DAP are at each other's throat.

Also, do bear in mind that Pas rejected the idea of her being the Selangor MB when Anwar ousted TS Khalid Ibrahim from the post last year.

That leaves it to the Pakatan man of the hour. 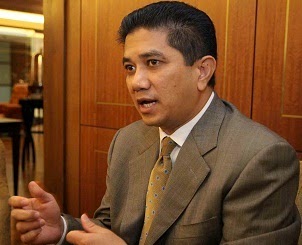 My bet is, he will be the one to lead Pakatan from now on.

In fact, I think he is the second most handsome politician in the country after KJ.

He may even be a PM material.

Okay, there was that blow job allegation thing but that's nothing compared to Anwar's habits.

Yes, Azmin is the best choice for Pakatan.

And once he got the top job, there will be no looking back for him.

Even after Anwar got out prison, I don't think he will be able to get it back from Azmin.

By the way, my bet is also that Azmin will cut down to size all of Anwar family members once he consolidated his position at the top.

Yup, Anwar, Dr Wan Azizah, Nurul Izzah and maybe Nurul Nuha who is Anwar's second daughter likely to be the PKR candidate in the coming Permatang Pauh by-election will be "fixed" by the smart and dashing Azmin.