You want to live near a rich people's shit treatment plant?

Woken up just before Subuh.

Did the necessary and now about to go out. I'm going to Singapore again for another round of Chinese New Year ferry duty..

Things they did in Johor since GE13

was not really answered.


The closest answer I got was this one:

Anonymous17 February 2015 at 09:47
Dear Annie,
I think you shouldn't have published something like this, because it's
i. Overly stupid (that's obvious)
ii. Overly seditious
iii. Overly malicious to innocent people (Khaled Nordin)
iv. Overly obscene (laid bare your typical way of asking stupid questions to hide your ignorance).

I am quite sure that one was written in Kota Iskandar.

Maybe I was not being clear.

Let me repeat it again.

What significant new things that Johor MB DS Mohd Khaled Nordin has done ever since he took over the post almost two years ago?

See, I'm not even accusing Khaled of anything. Just want to know what he had done.

I was reliably informed that this blog was monitored in Johor at least by the MB's office.

So, I am giving them the chance to educate me.

If the comms team in Irda (Iskandar Regional Development Authority) wants to help answer the question on behalf of their friends in Kota Iskandar, then they are welcomed to do so.

I know that they are monitoring this blog too.

Just don't give me anything related to what were done to develop Johor by former MB TS Abdul Ghani Othman.

The key words are significant and new.

While they are at it, hopefully they can also tell me whether all the shit at the soon to be luxuriously developed coastline of Danga Bay and what used to be the Lido beach will still be channeled to a treatment plant to be built at nearby Kampung Pasir.

A simple yes or no will do.

Or maybe Pulai MP Datuk Nur Jazlan Mohamed would like to answer that since the place is part of his constituency.

The last I checked he agreed to the project saying that the shit treatment plant wouldn't smell.

Kampung Pasir residents stage a walkout  when he said that.

I wonder if Jazlan, Khaled boys or the highly paid Irda people would like to live in Kampung Pasir next to where the shit of the rich and famous soon to be living along the Tebrau Straits coastline is to be processed.

Mail, you want to live near a shit treatment plant? 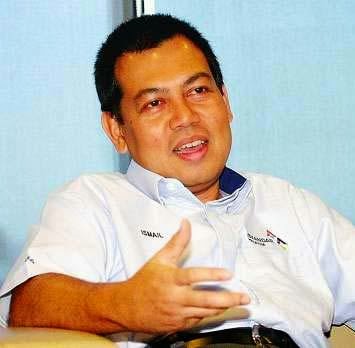 Datuk Ismail Ibrahim, the boss of Irda is sorts of my old friend. So I can be a bit casual with him.

Here are other stories about the shit treatment plant.

Actually, I got bigger questions to ask, but let's start from these small stuff first.

Okay, really need to get up and get going.

I will try to keep posting throughout the Chinese New Year celebrations.

If I don't, then you all should know that I'm busy celebrating lah.