Thanks Dr Mahathir, for still caring about Johor

I would like to record here my deepest gratitude to former Prime Minister Tun Dr Mahathir Mohamad for still caring about Johor. 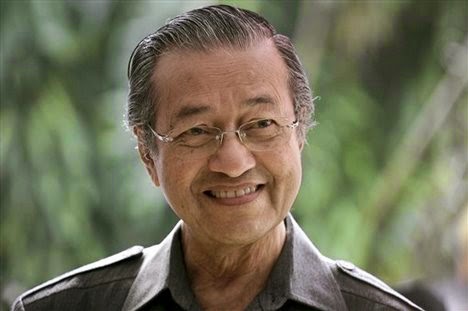 This is Tun M's latest posting in his blog,

Excerpt from the posting,

Selling Johor off to foreigners?

which I am reproducing in full here. I don't think that Rocky really minds me doing that.


Former Prime Minister Dr Mahathir Mohamad's latest article Jual Tanah ought to wake up the powers that be in Johor. Even someone who's just gotten back from a news hiatus like me can see that the Tun is very concerned with the way some individuals in the southern-most State conduct business and themselves. Land is a state matter so Menteri Besar Khaled Nordin better get ready some convincing answers to the good doctor's queries on behalf of the State Government as well as parties who represent the interest of the Istana Johor.  The parties who represent (or claim to represent) the Sultan of Johor and his business interests, especially, do watch it. Remember, these are no longer those good old days ...


I had highlighted the situation in my home state Johor several times in this blog. Of late I thought I am the only one among the pro-establishment bloggers who still care about it.

In fact, I did not even notice any of the pro-Pakatan bloggers highlighting the issues in Johor. Probably they are happy about what is going on and knew that if things continue to go rotten in the state, it would be easier for them to take over in the next general election.

Now that Tun M and Rocky had also highlighted the situation in Johor, I feel more upbeat. Maybe there is still hope to save my home state. Maybe the powers that be will now sit up and do something.

Umno leadership must save Johor, the TIANG SERI UMNO

I am reproducing here in full my pleading to PM DS Najib Razak which I posted on April 18. It was a day when I felt so sad thinking about what is happening in my beloved home state of Johor.


Datuk Najib, please save Johor
Honestly, I have to a certain extent given up on trying to save my home state Johor.

I am of the opinion that the excesses which have been going on in the state ever since the change of state administration following the 13th General Election last year would be too hard to stop now.

I had concluded that Johor is doomed to fall to DAP and its gang in the next general election.

More and more people, including from among the 83 per cent Johorean Malays who voted Barisan Nasional in GE13 are now fed-up with what's been going on in their state.

I do not wish to write in detail anymore about these excesses as I do not want to play any further part in causing the fall of Johor.

Suffice for me to say that Johor and its economic interests were being carved out into pieces and being distributed among several bunch of powerful people.

To make it even more shocking, all these were done in broad day light for all to see. It's done with impunity because those who did it feel that they were invincible and above the law.

There was no more sense of shame among these people.

That's why I had almost given up on Johor being saved.

I wouldn't have written all these if not for a plea I received from someone in Johor tonight.

The truth is I had tried, but I don't think I will get the desired results. I had written about all these several times previously without much impact.

After all, I am just an insignificant anonymous blogger.

All I could probably had achieved was getting more people to know about what were happening in Johor.

An instance which indicates that more people are becoming aware of the impending disaster in Johor was this blog posting by former minister and senior journalist DS Zainuddin Maidin,

Excerpts from the posting,

Honestly, I don't think the state government under the leadership of DS Mohd Khaled Nordin is capable of doing anything regarding the situation as I think his people are being part of the problem.

I believe most people who know about the situation in Johor would agreed with me.

My personal opinion was that only PM DS Najib Razak could do something to save Johor.

I had made my appeal to all those whom I know, who have direct access to the prime minister.

I am sure if Datuk Najib, being a good man that he is, realizes the dire situation in Johor, he would have put a stop to all those excesses. The problem is that he may not be informed of the true nature of the problem in the state and the discontent which is brewing there now.

Therefore, I am renewing my plea,

Datuk Najib, please save Johor. Thank you.
Posted by Annie at 13:12