Love and loyalty of a rakyat and MB for their Sultan

Those who claimed that they were loyal to a royalty by blindly following his wishes are actually the ones who will destroy the country's constitutional monarchy system.

Even worse, most of the time, these self-proclaimed loyalists of royalties are actually doing so because they benefitted from the excesses being committed.

They got contracts, important positions in a conglomerate or even a Menteri Besar post in return for their "loyalty" by taking part in the excesses themselves or tuning a blind eye to all that.

Their behavior will turn off the thinking rakyat, who eventually will rise in rebellion against the establishment, once they can't bear with the excesses anymore.

However, not all who love their Sultan are doing so blindly.


It tells the story of a rakyat's love for a Sultan and the true loyalty of a menteri besar for his monarch. 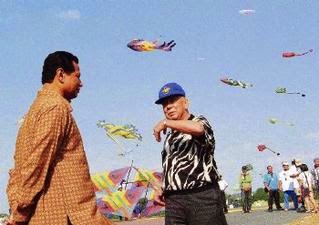 Meanwhile, the Johor's controversial Housing and Property Board Enactment 2014 was passed at the State assembly today.

Some were however still unhappy about the so-called amendments made to its bill which attempted to dilute the perception that the Sultan will still have the real say over the matter.

MB DS Mohamed Khaled Nordin during the PC after the passing of the enactment accused those who criticized the new state law as either not know what they were talking about or confused by what they know about it.

Hello Khaled, if we all got it wrong, why the hell did you need to amend the bill before tabling it at the State assembly today?

Why did you not just rammed it down the people's throat and be done with it?

Okay, let me try to answer those questions for you : It's because only after all the criticisms that you as the menteri besar realized that if the enactment was passed as it was originally intended to be, the likelihood of Sultan of Johor being dragged to court at a later date seems so real.

If that ever happened, you as the menteri besar would have absolutely failed in your duty to protect your Sultan from being placed in such a demeaning spot.

Former minister and senior journalist Zainuddin Maidin posted this in his blog today,


Meanwhile, former PM Tun Dr Mahathir Mohamad whom I believe is the one who gave many the courage to openly oppose the plan by Khaled's administration to grant executive power to Sultan of Johor today further explained why we need to do so in his latest posting,

"It was because the rulers could be so easily persuaded to make wrong decisions that the executive authority was transferred to the elected Government. The Government and its leaders and Parliament were expected to be firm in defending the Constitution and the interest of the people and country. The Prime Minister in particular must be firm and not be swayed by customary adats or deference to the rulers. The rulers are to be paid handsome pensions and may not be involved in business. This was considered necessary because officers tend to defer to the wishes of rulers and would find difficulty in rejecting business propositions by them. There was also the belief that unscrupulous businessmen would make use of the Sultans to get an advantage over others and to bypass rules and policies."