A poignant story of a filial son

I read with great sadness in my heart this poignant article in the New Straits Times yesterday which I am reproducing in full here,

THE sound of rain beating down on the corrugated iron roof of my father’s house was loud but the din was not what had awakened me from my sleep.
In the semi-darkness of the hall, I could see that my 81-year-old father, whom we call Bapak, was sitting up in his armchair. He was weeping and it was the sound of his sobs that woke me up.
“It is raining,” he said when I asked him what was bothering him.
“How do I tap rubber tomorrow? I cannot earn any money tomorrow. How do I feed my family if the rain continues,” he said in between sobs.
Bapak was re-living his past experience, or rather his worst experience. His failing memory often returns to the time in the 1970s when he worked as a rubber tapper in Masai, Johor. The rainy season was his worst nightmare, as it would mean the loss of his main income to feed, clothe and send his nine kids to school.
I remember him having bad moods during the rainy season but I did not know he shed tears for us until that night, about three months ago, when Bapak thought he was back in the 1970s.
He then decided to work in an oil palm plantation, harvesting fresh fruit bunches. His new job was much harder and did not pay much, just four sen for every oil palm fruit bunch he harvested. However, it had two big advantages over tapping of rubber trees — his working days were no longer dictated by the weather and the whole family could help him earn more money.
And help him we did, working as a unit to harvest around 1,000 fruit bunches a day, earning around RM40, which was a big jump compared with the RM5 he earned at the rubber estate.
When he started working, Bapak had no money to buy a wheelbarrow (it cost RM50 at the time) so he had to use rattan baskets and a wooden shoulder pole provided by the estate management to transport the oil palm fruit to the roadside.
His resolve to earn as much money as possible for his family was much stronger than the thick mahogany pole he carried.
This was proven one day when Bapak kept telling me to load more oil palm fruit into the basket as he wanted to carry as much as possible to the roadside collection area. I was reluctant to add more into the twin baskets as they were already full.
I was afraid the extra load would hurt Bapak’s back and shoulder and was horrified when I heard a loud crack when he put his left shoulder under the pole. I thought that he had broken something.
And he had. But it wasn’t any of his bones. Bapak had a tough time explaining to the estate management how he had broken the shoulder pole before he could get a replacement. That was almost 40 years ago, but the event was vivid in my mind as I gave my father a massage last Sunday.
Bapak spent all his energy raising me and my siblings that he is physically weak now. He cringed in pain as I massaged his left shoulder, the very same one that broke the thick wooden pole many years ago.
“It is up to you. I will follow your decision. Whatever you think is good, is also fine by me.”
Those were my father’s words when I told him of my intention of bringing him to live with me in Terengganu.
How I wished I had also said the same words to him when I was a kid, but at least I can now care for him much like he did for me.
I have decided to dedicate my time to care for my elderly parents and the only way for me to do that is by quitting my job as a journalist.
Friends and colleagues have told me not to quit, that I can care for my parents and be a journalist at the same time but the hectic work schedule means that I will have to be away from them even if I bring them to live with me in Terengganu. I cannot put my career ahead of my father, who, despite being unable to read or write, had taught me my first few English words.
Piston, crankshaft, connecting rod, timing chain and other parts of a motorcycle engine were the first English words that got stuck in my head, and it was Bapak, who could barely speak Malay (we spoke Javanese at home), who taught me those words when, as a toddler, I sat beside him as he repaired motorcycles to earn some extra income.
I will be repairing motorcycles in my little workshop in Tok Jembal and this time Bapak will be by my side. My friends said that I made a bold decision to be an entrepreneur, but actually I just reverted to my former role, to be my father’s son.
Happy Fathers Day to all the fathers out there and, on behalf of all sons everywhere, thank you.


Satiman Jamin is the outgoing NST bureau chief of Terengganu.

He had just resigned from his post a few days ago for the reason he stated in that article.

He is indeed a truly filial son. 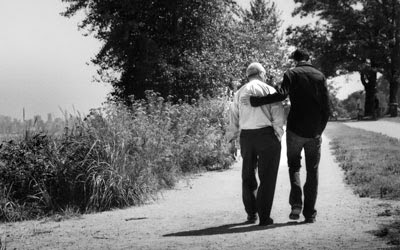 My heart goes out to him as his full story is actually really heart breaking. It was however not for me to tell it here.

I had actually first read Satiman's articles when he was a JB-based NST journalist.

They were very good, particularly the features and human interest stories.

You can just google his name to read his past articles.

I am wishing Satiman all the best and hopefully he will continue to write, one way or another.

May Allah bless him and his family.

On another note, it's unfortunate that the one and only pro-establishment English newspaper in the country lost another good writer as its circulation slides further down to below 100,000 copies per day.

Hopefully, the bosses of NST will soon find a way to revive its fortune.
Posted by Annie at 00:20