I have been reliably informed that the Khaled Nordin's administration had sent their people to set up a meeting between former PM Tun Dr Mahathir Mohamad and the Sultan of Johor.

It was meant to persuade Dr Mahathir to stop his criticisms of the Johor Ruler and the State government.

Dr Mahathir has been at the forefront in the fight to end the excesses in Johor, which reached its climax with the enactment of the controversial Johor Housing and Property Board Bill which would have given the Sultan of Johor direct executive power, which is repugnance to the Federal Constitution.

Dr Mahathir's open criticisms, particularly over the large-scale selling of State land by the palace to foreigners had led others, including pro-establishment blogs and mainstream newspapers to do the same.

I was informed that the Khaled's administration had scrambled a crisis management action plan to deal with the crisis.

The action plan had identified that the key in diffusing the attacks was to neutralise Dr Mahathir's criticisms which was believed will be able to eventually shut down the other critics.

It was with that in mind that Khaled's people had approached the Dr Mahathir's camp to set up the meeting between the Sultan himself and the elderly statesman.

They believed that Dr Mahathir, despite his criticisms, has a soft spot for the Sultan of Johor and will eventually relent and ease off his criticisms if they meet in person.

So far, the Khaled's people had been told that Dr Mahathir is engaged with other matters and have no time yet for such a meeting.

What ever it is, I am confident that Dr Mahathir will not abandon Johoreans in this matter. His strength and commitment to save Johor, as far as I am concerned, is unquestionable.

Meanwhile, the harsh criticisms leveled at the Sultan of Johor and the State government over the various issues made known to the public of late had taken a heavy toll.

It was obvious that the State government's attempts to explain itself to Johoreans over the various related issues had failed.

The rumbling on the ground was real and getting louder.

The Khaled Nordin's crisis management action plan had also been devised to handle this.

The first step, I was told, was to neutralize Utusan, the Malay language newspaper which open criticism is causing the most damage among the rural Malays.

This move took top priority as the Sultan of Johor was recently about to embark on the annual Kembara Mahkota Johor trip which was to take him to several places in the rural Johorean Malays heartland.

It was understood that top editors of Utusan were summoned for an audience with the Sultan on the side of the recent Rulers' conference in Kuala Lumpur.

I was not informed what were offered to the Utusan editors but the most obvious result of that meeting was that the newspaper had given an extensive coverage of the Kembara Mahkota Johor.

Despite that, the crisis had adversely affected the mood of the just concluded event. Those who were present during the three-day trip of the Sultan had told me that the atmosphere was not as festive as it used to be in previous years.

Still it was a good move to neutralise Utusan as if it had continued with its criticisms, it could be fatal for the Johor establishment.

The next step is to engage another major media group - the NSTP, in particular the NST newspaper which editorial had been harsh on the State government as you can read here,

and a brave article here,


The people must come first

which was written by the NSTP Group Managing Editor Datuk Jalil Hamid himself, seen here with PM DS Najib Razak, 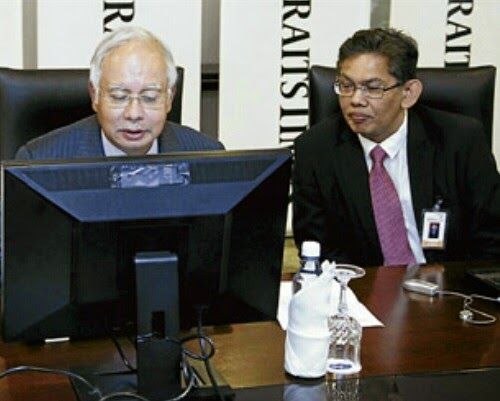 As for the social media, particularly the pro-establishment blogs, which have been critical over the Johor crisis, I was told that a substantial amount of financial allocation had been set aside to neutralise them.

It was understood that the Khaled Nordin's camp was not particularly worried about criticisms from the opposition side as they were hoping that they will only go on the attack mode only when it nears an election.
Posted by Annie at 12:11