Why Yeo Bee Yin and gang want to close down Lynas 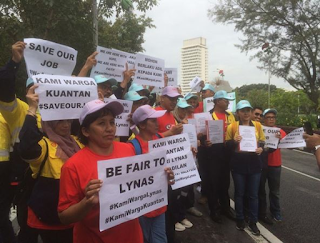 
Their representative, Jumaat Mansor, told reporters at the entrance to Parliament that Lynas may be facing problems with compliance, which may lead to the company not having its licence renewed by the government in September next year.
If the problem is not dealt with immediately, more than 1,000 employees – 97 per cent of whom are locals – will be out of job and this could affect more than 4,000 members of their households.
“We are gathering here today hoping the government will reconsider its decision and think of the fate of the workers should the plant’s licence not be renewed,” he said.
I'm glad that the Lynas employees are still fighting for their rights and asking for fair treatment by the government.

I understand that they are doing it in face of adversity as the current government for now looks hell bent on closing down their workplace.

The minister in charge, Yeo Bee Yin even twisted the finding of the executive committee that she herself was tasked to set up to review Lynas' operations.

She insisted that Lynas must ship the residue of its plant to Australia while the actual fact was that the committee gave Lynas three options which were listed at number 28 on page 17 of its report.

You may wonder why the minister did such a thing and the answer is simple - she, along with other Pakatan politicians, the likes of Fuziah Salleh and Wong Tack are to gain politically with the shutting down of Lynas.

Whether it's done rightfully or wrongfully doesn't really matter to them.

Yeo Bee Yin, has been an anti-Lynas advocate since the start when DAP used the issue to galvanise especially the Chinese community support for the party.

The anti-Lynas Himpunan Hijau rally in Kuantan in February, 2012 was the first ever with overwhelmingly Chinese-majority participants since 1969. It was later emulated at several other Bersih rallies. 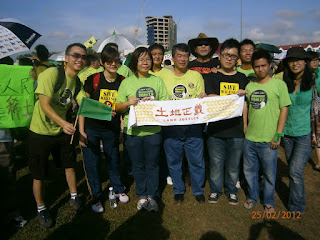 Of course now the minister, who is from DAP couldn't allow Lynas to continue its operation even after the review committee found nothing wrong with it.

To allow Lynas to continue means admitting that DAP and its allies have all the while lied from the start of their smear campaign against BN way back before the 2013 general election.

This is what Yeo Bee Yin wrote about Lynas back then;

Well, it's actually nothing much - just her trying to convince people about how environmentally aware and knowledgeable that she was while whacking the then minister in charge of environment Maximus Ongkili over Lynas.

Now, she is the one in charge and you all can see that she is still trying to profit politically from the whole thing to the point of twisting facts laid down by the Lynas review committee which members she herself appointed.

Does she really care about the environment?

Well, she was silent on the potential destruction of three Ramsar sites in Johor, which is her own state.

You can read that in this previous post of mine;

Re-gazetting Pulau Kukup and others,

Some Pakatan supporters had argued that Yeo Bee Yin should be excused as she was inexperienced and that's why she was clueless about Ramsar sites and such.

I don't think that's a good excuse for a minister in charge of environment who once tried to convince people about how knowledgeable and caring she was for the envoironment.

Well, she seems to know a lot about Lynas though. She apparently knows so much that she even ignored facts laid out by experts appointed by herself to review Lynas' operations.

And those other Pakatan self-proclaimed environmentalists Fuziah and Wong Tack....what a bunch of fakes.

Ya, that's what I think of them.

It's all just for their political interests.

It doesn't matter to them if people lose their jobs because they make decisions and campaigned on an issue based on lies and twisted facts.

They also don't care if investors shy away from this country because our government chase away or penalise fellow investors just because a minister and some politicians on its side wanted to benefit politically from it doing so.

That's what this Lynas issue is all about now.

Oh, ya, they will tell the Lynas employees who are about to lose their jobs to look for other employment....easy peasy.....just like what they said to others such as those 20,000 Gamuda people who were at risk of becoming unemployed when they stopped the MRT project back than.

Ya, so easy for them.

So much for Malaysia Baru.
Posted by Annie at 13:06