Counting on Pribumi Bersatu to seek justice for Adib

The Pribumi Bersatu's second AGM will be held in Putrajaya this weekend.

Bersatu will be the preferred choice for Malays, Bumiputera


Its Information chief, Dr Mohd Radzi Md Jidin is confident that  the party will be the preferred choice, compared with Umno and PAS, in championing the special rights of the Malays and Bumiputera as enshrined in the Federal Constitution.
“The Malays will look at us as a party that can continue to help them…the Malays see Bersatu as an alternative for them. The current political dynamic shows many Malays are now ready to be with Bersatu,” he said during an interview with the media.
That's very nice, I guess.

Since that was said, I'm hoping that Pribumi Bersatu, as the main Malay and Bumiputera based party in the current ruling coalition can use its AGM as a platform to tell the government to give justice to murdered fireman Muhammad Adib Mohd Kassim and his loved ones.

Adib was clearly murdered during the riot at the temple because he was a Malay Muslim.

So, I believe that all those who claimed to be championing the Malays, Islam and Bumiputera in Pribumi Bersatu should voice out their demand for justice to be done.

You can't make a claim of being such a champion when racists and religious extremists can get away with murdering a Malay Muslim while those who instigated and supported them continue to sit next to your leaders in the government.

Umno, Pas and those Malay and Muslim NGOs can only make noises over the matter but they don't have the power to do what Pribumi Bersatu could do to bring justice for Adib and his loved ones.

I'm not even counting on Amanah to do anything about this because I think they are even more useless than the powerless Umno and Pas....because I actually think they are really scared of DAP.

Have you all ever heard of any Amanah leader saying anything that contradict DAP?

For one thing, they have Tun Dr Mahathir Mohamad as the party president and prime minister. 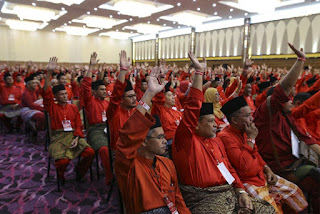 So, why should they be afraid of DAP or PKR for that matter, right?

I know they will be busy with all the GE14 victory talks and such but still, I really hope the Pribumi Bersatu delegates will all speak out to demand justice for Adib and his loved ones at the AGM this weekend.

They must put pressure on the government and authorities to take action.

They really should not let the murderers and those who instigated and defended them escape punishment.

That's my wish for this coming Pribumi Bersatu's AGM.

However, I was a bit concerned when I read this report which quoted the party's secretary-general,

Agenda to improve country among focus
at Bersatu general assembly

He advised delegates, especially those who would be on stage to debate for the first time, to control their emotions and to not deviate from the topic.“It will be a closed debate because of the sensitivities involved,” he added.

I was like...What? Closed debate?

Come on la, what are they so scared of now that they are in power?

Just say what needed to be said, okay.

Here, I give an example,

"Dear Malaysians, please don't beat up a fireman to death just because he is a Malay Muslim. Malay Muslim fireman just want to put out a fire and save lives. He is not there to destroy your temple. Thank you."

You all said you are better than Umno and Pas. So, be brave la.

Well, I hope the party secretary-general will change his mind and let the delegates say things like that openly.

Otherwise Pribumi Bersatu will just be a Malay pussycat party....too scared of DAP like Amanah, I guess.
Posted by Annie at 06:14