Please pay back PTPTN loans, it's beyond politics now

My friend Ai wrote this post in her now mothballed Big Cat blog back in April 2012, at the height of the Pakatan's anti-PTPTN campaign ,


Some "student activists" were camping at Dataran Merdeka at that time to demand free education and shutting down of PTPTN.

Backing them were Pakatan leaders who used the issue as a campaign material. 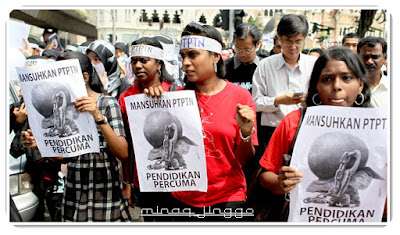 Anyway, the article reminds me of a conversation I had with someone close to me about nine years ago.

Well, that someone is actually my mother. Ai has always been close to my mother.

This is what she wrote about the conversation with my mother;

Deep down inside at that time, I knew she was right. We can't continue pouring money to help undeserving people. They will just ask for more and more. They are just incapable of thinking responsibly and will always believe that everyone else need to give them everything that they want. These are the shameless Malays. These are the type that are camping at the Dataran Merdeka.
Don't they realise that the money they demand be given to them actually belong to all Malaysians including the poor who pay the taxes in one form or another? Yes, that includes the Petronas money. That one is also duit rakyat, ok?Don't they have any maruah claiming that they can't be paying back that money once they graduated and have a good job? Don't they realise that they already have it easy?The person I had that argument, for instance, spent two years as a waitress at a restaurant in Singapore before saving enough to continue her studies in Taiwan. No scholarships or even loan despite her being among the top students in her school.If she is a Malay, definitely she can get a place in UiTM, complete with PTPTN loan. I am certain she will gladly pay back the loan once she finished her studies, and probably think how wonderful of the government to provide such a loan facility for her.But as it turned out, the tough road she went through turned out to be a blessing for her. It trained her to be tough and street wise....much better than me, in fact. She is now successful and as far as I am concern have the bragging right of being the winner of our past arguments on this matter. Well, good for her.

That was over six years ago.

Pakatan had continued the anti-PTPTN campaign all the way through the general election in 2013 and right up to the GE14 in May this year.

Now, as everyone knows, the Pakatan government, set up following the victory realised that it's almost impossible to provide free education or even to waive the PTPTN debts.

It even went through quite a bit of problem managing the repayment of those debts, causing a lot of anger among especially those who have been paying their loans as per required of them.

Of course those who have not been paying are making the noisier racket as in the past.

As a result, the PTPTN people had backed down and just a few days ago said

PTPTN to carry out detailed study


Personally, I'm glad they have decided on that.

They should not cause hardship for those who have been paying just because there are those who are shameless enough not to pay their PTPTN loans.

Whatever it is, the PTPTN borrowers need to pay back their loans.

Really, this is beyond politics.

Pakatan politicians such as Syed Saddiq who became a minister after exploiting the issue back then should just shut up and stop trying to be a hero now that the whole thing has turned the other way around.

Others who also flip flopped on PTPTN such as finance minister Guan Eng should do the same.

They should stop their current bullshit on the issue.

They are just making things look worse for the government.

They should instead apologise to the students, PTPTN borrowers and all Malaysians for the empty promises.

Maybe that could cool off the public anger a bit.

Let the PTPTN people sort out the mess, or even better help them in whatever way possible.

Let them come up with the best possible way to enable borrowers pay back their PTPTN loans without causing them too much hardship.

As for those anti-Pakatan people, I think you all should ease off on this one for now as the main thing is to get people pay back the loans so that we can help finance the future generation of students who need the PTPTN loan facilities.

If you all are still sore with Pakatan people who promised the students the sun, moon and stars over the PTPTN issue, let the people be the judge of that in the next general election.

To the PTPTN borrowers, especially those who refused to pay back their loans, please read back what Ai wrote above.

Her message was more or less the same as Dr Mahathir's


No matter what others would say, Dr Mahathir has always been consistent that those who borrowed money must pay back.

It's not after all him who made the empty promises such as providing free education and abolishing PTPTN.

They were made way before he joined Pakatan by irresponsible politicians who are now in power.
Posted by Annie at 13:30