Malays will cool off, then business as usual

Yesterday, a friend forwarded to me a statement issued over the death of fireman Muhammad Adib Mohd Kassim.

I noticed that it was issued by an association representing young Christians.

I deleted it without reading it.

I was not in the mood to hear another bullshit justifying the murder of Adib. I still am.

I can also do without all those fake sympathies and condescending calls for unity and forgiveness.

Later, another friend, a Chinese called asking how bad was the situation following news of Adib's passing.

And those who supported the murderers were not showing any sign of repentance.

I deleted all the comments by the usual trolls of this blog and others who tried to justify the murder of Adib.

There were plenty of them.

I noticed there were plenty of the same at other platforms.

They argued that Adib's death was accidental and that the murderers were within their right to murder Adib.

It made my blood boiled reading them.

These bastards think they are so superior that they dare to write all those comments justifying the murder of Adib and defending the instigators and defenders of the murderers.

Yes, that include the defenders of those sons of bitches Wythia Moorthy and Ganabatirau.

They are still there, smug in their position of power.

They must be thinking that, these stupid useless Malays will cool off and we can carry on with business as usual.

Malays always cool off after a while.

The temple is still there too. It's now a symbol which will remain in my mind of Adib's murder.

And it's protected by the police now, who are mostly Malays. 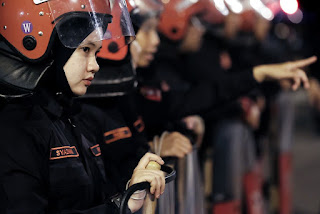 That's probably why those bastards were so smug and kept posting comments which made me felt murderous myself.

I don't know how long I will remain angry like this.

I don't know how long the Malays will remain angry.

After three weeks, no one has been charged over the murder of Adib.

I don't know why.

But I will keep waiting for the murderers of Adib to be hanged for what they did.

I will also keep waiting for those racists in power who instigated the murder of Adib and shielding the murderers be removed from their posts.

If this current government refuse to remove those racist bastards, then for me, it's also responsible by way of condoning their actions.
Posted by Annie at 14:30